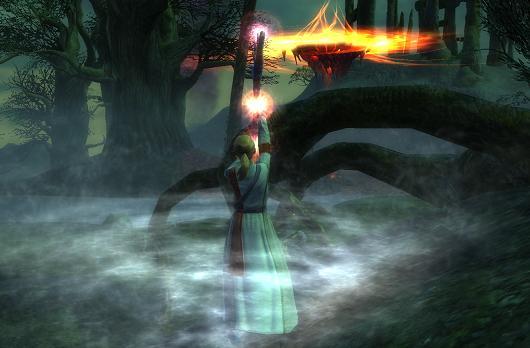 One of the reasons I like RIFT so much is that it has similar features to my other favorite MMO, EverQuest II. That's not really surprising, since RIFT's Executive Producer is Scott Hartsman, who was formerly EQII's Senior Producer and Creative Director. Since mentoring is one of the cornerstones of Norrath, it's something I was hoping would make its way into the world of Telara. But mentoring in RIFT is a little different what's in EQII, and it's worth taking a closer look at those changes because they've broken the major hurdle to allowing high- and low-level players to do things together. In fact, I think mentoring is something that every level-based MMO should add as a standard feature.

The evolution of mentoring

Before looking at RIFT's mentoring system, it's worth taking a quick look at EQII's system to compare. In EverQuest II, players originally could drop down in level, but in order to do so, they had to be grouped with a lower-level player, and they didn't have a choice as to which level to mentor down to -- it had to be the same as the grouped player. On top of that, you had to rework your hotbar because you could use only the abilities that were available at that particular level. Over time, the system's been made much more user-friendly, so players keep their abilities (although they're scaled down) and can self-mentor by visiting a Chronomage NPC (although you can only drop down in five-level increments).

I've always been a big fan of the system because I've used it often in the past to drop down and group with friends who are new to the game or who are on alts. The only downside is that as the mentor, I'm pretty much just a tour guide. In EQII's system, if you're using it to group with friends and do a classic dungeon run, earned experience isn't that great and the rewards aren't going to be useful (since the coin and gear that drops will all be lower-level).

RIFT has taken the best ideas from EQII's system and improved upon them. In RIFT, you need only click on your profile to choose what level to drop down to (although you have to mentor at least five levels lower than your current level, and you can't drop down lower than level 10). In addition, everything is scaled just as it is in EQII, so your gear and abilities are reduced in power to put you on par with your peers. More importantly, you get appropriate rewards for your time mentored, so you get a decent amount of experience.

Even more notable is the fact that the rewards are scaled by level. I was mentored down with some friends over the weekend to run some instant adventures and zone events, and I was getting inscribed sourcestone while they were getting cursed (the lower-level versions). Also, we were each getting gear cache boxes, and when we clicked on them, we got gear that was scaled to our level. Granted, it might not necessarily be an upgrade to a longtime level 50 player with raid gear, but there is a chance of getting blue and purple boxes, so more casual players might actually walk away with an upgrade for their mentoring efforts. In addition, I noticed a little more experience when I was mentoring while grouped with friends compared to mentoring solo, so there's a little incentive to find a buddy when you drop down in level! Essentially, the team members at Trion looked at ways to make mentoring meaningful for both the mentor and the mentored player, and they pretty much nailed it.

Tearing down the walls

RIFT is a perfect game for the mentoring system because it fits so well with the game's core of dynamic invasions and rift events. They actually form a neat little symbiotic relationship. Rift invasions are at their best when lots of players are participating, and the mentor system needs an activity that is inclusive and fun in order to entice players into dropping down in level. The game has always shone brightest when it was about those borg-like herds of players magically coming together to destroy invasions and seal rifts, but those thinned out as players leveled up and the population became stretched out over a greater level distance. What players are used to in MMOs is almost a barbell shape to zone populations over time: big clumps of players at the beginning and end zones and a thin line of players throughout the mid-level zones. With mentoring, there's much more movement throughout the level ladder, and with the possibility of new instant adventures in the mid-level zones, the barbell shape should smooth out quite a bit.

For level-capped players now, every zone has value, and it's a system that has a ripple effect in other areas. It seems to have increased the low-level zone events, since the player population is much higher there. It's also helped new players level up quickly, since the low level IAs are chock-full of players roaring through the objectives. Trial players get a much busier slice of life now as well, which probably helps them in their decision whether to subscribe or not. Meanwhile, those old quests collecting dust in your journal suddenly have new meaning, since you can mentor down and get some decent experience for killing what would normally be trivial mobs along the way. It also seems to have increased the player pool in the looking-for-group tool for those lower-level, normal dungeon instances. (Although if you're going in with a pre-set group, make sure everyone's mentored before you queue up! We learned the hard way that you can't mentor down once inside the dungeon.)

Going forward, RIFT's mentoring system also means that new content for low levels is actually content that everyone can use. As games age, you sometimes see an "us vs. them" philosophy develop because any developer time spent on low-level content is time not spent on the endgame and vice versa. Mentoring has helped demolish both that fence and the barrier to grouping in general. In other words, the straight-edged railway of leveling has now been replaced by a Dr. Who phone booth of time travel, and it's one heck of a fun ride.

Whether they're keeping the vigil or defying the gods, Karen Bryan and Justin Olivetti save Telara on a weekly basis. Covering all aspects of life in RIFT, from solo play to guild raids, their column is dedicated to backhanding multidimensional tears so hard that they go crying to their mommas. Email Karen and Justin for questions, comments, and adulation.
In this article: chronomage, conquest, enter-at-your-own-rift, eqii-mentoring, fantasy, featured, karen-bryan, mentor, mentoring, opinion, pvp, rift, rift-1.9, rift-instant-adventures, rift-lite, rift-mentoring, rift-planes-of-telara, rift-zone-events, rvr, sidekicking, telara, three-faction-pvp, three-way-pvp, trion, trion-worlds
All products recommended by Engadget are selected by our editorial team, independent of our parent company. Some of our stories include affiliate links. If you buy something through one of these links, we may earn an affiliate commission.