When the MacBook Pro with Retina display is in the game, Apple's "regular" Pros may seem a bit like also-rans. After all, why would you choose them when you could get a brilliant 15-inch 2,880 x 1,800 IPS panel and a Core i7 Ivy Bridge processor? Well, price, for one thing. While we walked away from our Retina MBP review mighty impressed, that model starts at $2,199. The latest crop of Pros, meanwhile, keep the same pricing scheme as last year's models ($1,199 and up), but step up to Intel's third-generation Ivy Bridge processors. We took the entry-level 13-incher for a spin to get a feel for how the dual-core Core i5 CPU, 4GB of RAM and Intel HD Graphics 4000 stack up to the competition. Read on to see how it fared. %Gallery-161394% 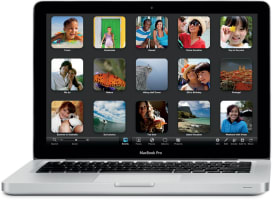 The latest MacBook Pros look nearly identical to their 2011 predecessors, with the same aluminum, unibody construction, backlit, island-style keyboard and glass trackpad. The dimensions and weight also remain unchanged: the 13-inch version tips in at 4.5 pounds and measures 0.95 inches thick, while the new 15-inch Pro weighs 5.6 pounds. Those who salivated when Apple revealed the Retina model's 0.71-inch-thick, 4.46-pound body may be unimpressed by this guy's slightly beefier profile, but the Pro looks as polished as ever, and is definitely compact enough that toting it around shouldn't be an issue.

The latest system ships with two USB 3.0 sockets (up from USB 2.0), but otherwise you're looking at a very familiar selection of ports. Most of those connections, including Gigabit Ethernet, Thunderbolt and the SDXC card slot, are crammed on the left edge of the machine, with the slot-loading optical drive occupying the right side. While the Retina Pro and the latest MacBook Airs sport new MagSafe 2 connectors, the 13-inch Pro (along with its 15-inch sibling) still has the last-gen version.

We won't spend too much time rehahsing the MacBook Pro's keyboard and touchpad, as they haven't changed since we last took a peek. Still, it's worth reiterating that these are two of the strongest weapons in Apple's hardware arsenal. Typing on the chiclet-style keys is a pleasure, and the glass trackpad is smooth and responsive. Similarly, the display and sound don't pack any surprises. The 1,280 x 800 panel delivers crisp images with accurate colors, and viewing angles are wide enough to comfortably watch movies from off-center. That said, we wouldn't mind a higher resolution -- after all, the 13-inch Samsung Series 9 boasts a stellar 1,600 x 900 panel, and ASUS' Zenbook Prime lineup includes systems with up to full 1080p resolutions. And while we appreciate that the speakers pump out sufficiently loud audio, songs have a thin, somewhat tinny quality to them. If you're going to spend $1,200-plus on a laptop, you may as well spring for some desktop speakers too.

Along with just about every recently released laptop hitting the market, the mid-2012 MacBook Pro steps up to Ivy Bridge. All models, including our entry-level unit with a 2.5GHz Core i5 processor, 4GB of RAM and a 5,400RPM 500GB hard drive, benefit from this upgrade. On synthetic performance tests such as Geekbench and Xbench, at least, the 13-inch Pro doesn't set any records. The Retina model scored more than 4,000 points higher on Geekbench, and MacBook Pros of years past with discrete graphics also blew this guy out of the water. In Xbench, this system proved its mettle a bit more. Its score of 368 tops all older Macs we've tested -- save, of course, for the new Retina-toting model.

We used Bootcamp to install Windows so that we could put the laptop through its paces in PCMark Vantage and 3DMark06. Interestingly, its results painted a similar picture to what we saw when running Lion (we ran these tests before the Mountain Lion upgrade hit, though as we said in our review of the new OS, performance gains are negligible). The Acer Aspire Timeline Ultra M3, with discrete graphics and a Core i7 processor, crushed the Pro with a more than 5,000-point delta in 3DMark06, but other systems with integrated graphics, such as the Lenovo IdeaPad U310, landed in the same ballpark, though most still scored a bit higher.

While Intel HD Graphics 4000 are an improvement from the 3000 edition, the lack of discrete graphics holds you back from any soul-crushing gaming power. Still, that doesn't mean you can't fire up your favorite titles. When we played some World of Warcraft, frame rates stayed within the 30 to 60 fps range. When running Windows, the system averaged a respectable 60 fps in Batman: Arkham Asylum.

Still, you're not buying a MacBook Pro to get your frag on (or you shouldn't be, anyway), so the MBP's modest graphics performance is far less important than its day-to-day capabilities. In that regard, this machine is more than passing. Throughout our testing, we worked across three browsers, ran a chat client, wrote in TextEdit and did some light gaming, all without noticing any glitches or sluggishness.

In our video rundown test, the 13-inch Pro lasted six hours and 51 minutes in OS X, which is in line with Apple's rated battery life of up to seven hours. That longevity is also on par with other Macs, including the early-2011 Pro, which lasted about 40 minutes longer. When we ran the test on the Windows side, the system logged four hours and 25 minutes, which puts it in line with ultraportables such as the 13-inch Series 9.

More anecdotally, the laptop's 63.5Wh battery gave us roughly five hours of runtime when we had about six programs running in the background while surfing the web, writing emails, working in the word processor and doing occasional photo editing.

The new Pro originally shipped with OS X 10.7 (Lion), though if you're a regular reader of this site you know that Mountain Lion has arrived. If you purchase the new Pro or one of Apple's Ivy Bridge-powered MacBook Airs now, you'll get 0S X 10.8 out of the box. If you don't have a 2012 Mac, the upgrade will cost you $20.

You can get a more in-depth look at the OS in our full review, but a few highlights include deep iCloud integration, all-new features such as Messages and the Notification Center. Like other Apple computers, the MacBook Pro is covered by the company's one-year limited warranty, which includes 90 days of free phone support. You can extend that coverage for up to three years with the Apple Care plan, which will set you back $249.

The Retina display model may be an expensive alternative to the standard Pro, but the new MacBook Air is similarly priced (starting at $1,199 for the 13-inch model) and offers faster performance thanks to its SSD. The Pro does offer more storage (up to 750GB) and an optical drive, but it's also heavier.

The $1,400 HP Envy Spectre 14 offers a Core i5 Ivy Bridge CPU, Intel HD Graphics 4000, a 128GB SSD and, most importantly, a gorgeous 1,600 x 900 display. If you prefer the 15-inch size, the Envy 15 -- going for $1,100 for a Core i5 CPU, 6GB of RAM, a 750GB hard drive and AMD Radeon graphics -- is a solid contender. Its design unabashedly evokes the MacBook Pro, though, which depending on where you stand could be a bad or a good thing. The 1080p, IPS Radiance display offers great viewing angles, but colors, especially red and purple, were a bit off when we tested the machine.

If you want discrete graphics in this price range, you're in luck. The $1,300 Dell XPS 14z comes with NVIDIA's GeForce GT520M CPU along with Intel HD Graphics 3000, plus a Core i7 CPU. Its performance on graphics benchmarks isn't much different than the Pro's, though it's worth mentioning it runs a Sandy Bridge processor. What the laptop does have in its favor, though, is a comfortable keyboard and a nearly bezel-less design that gives you plenty of screen real estate. Likewise, the XPS 15z is a worthwhile option for those of you who prefer a slightly larger screen. A $1,100 configuration gives you a Core i5 CPU, NVIDIA graphics with 2GB of dedicated memory and a 750GB hard drive.

For $1,000, Sony's VAIO S 13 runs a Core i5 Ivy Bridge CPU clocked at 2.5GHz, includes 500GB of storage and offers discrete graphics courtesy of NVIDIA's GeForce GT640M chip. For the same price, the 15-inch VAIO S 15 includes the same processor, a 1,920 x 1,080 display and NVIDIA GeForce GT640M LE graphics, all in a magnesium alloy body that weighs 4.42 pounds. If you're willing to venture north of the MacBook Pro's asking price but need to stop short of the Retina's realm, the 13-inch VAIO Z (now $1,600) is very nice indeed. It packs a Core i5 Ivy Bridge CPU with 128GB of solid-state storage, and its 2.6-pound, carbon fiber design is both lightweight and understated. The external Power Media Dock offers discrete graphics, not to mention a Blu-ray drive, so you can get more solid graphics performance if you're willing to shell out $500 more.

We'll only mention the Retina display model in passing. The MacBook Pro's aspirational older brother is costly, yes, but the screen is amazing, and with a quad-core CPU, NVIDIA GeForce GT 650M graphics and up to 16GB of RAM, it's an ace performer.

Equipped with a new Core i5 Ivy Bridge processor and Intel HD Graphics 4000, this year's MacBook Pro is a capable machine. Is it the highest-performing system out there? Nah -- and without discrete graphics or an SSD, that's hardly a surprise. This is a solid laptop, even with the entry-level specs, but if you can part ways with a bit more dough, you'll be a happier camper with a Core i7, SSD-equipped configuration. If your heart isn't set on the 13-inch form factor, you can always go for the 15-inch Pro, which is available with an NVIDIA GT 650M GPU, not to mention a higher-res display.

More broadly, though, Apple's new MacBook Pro with Retina display has put a wrench in the company's otherwise straightforward lineup. If you're an OS X fan, you're no longer making a simple decision between the Air's portability and the Pro's graphics chops / ample storage -- a brilliant screen is vying for your dollars now, too. If your needs are fairly simple, just go for the Air: it's a faster performer, and your back will thank you. If you need discrete graphics and an optical drive (or just can't afford the Retina model), the Pro remains a solid bet.