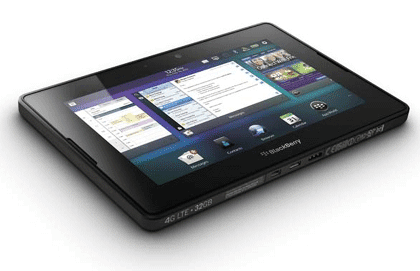 The wait for a quicker PlayBook is nearly over -- for our neighbors to the north, at least. RIM let it be known via the official BlackBerry blog that the followup to its business-minded slate will be hitting "select" Canadian retailers on August 9th. Not convinced that you need the BlackBerry PlayBook 4G LTE in your life? RIM's got four, count 'em four, reasons to pick up the verbose slate -- speed, size, web browsing and movies and TV -- which can be found in moderate detail at the source link below. The tablet features 32GB of storage and OS 2.0.1 pre-loaded -- the aforementioned software is also currently available as a maintenance update for owners of the old fashioned WiFi model. The slightly souped-up PlayBook is hitting Canada first, but will be coming to additional areas including the US, Europe, South Africa, the Caribbean and Latin America in "coming months."

Update: As had been hinted before, the 4G PlayBook also ramps up to 1.5GHz from the original 1GHz -- that's a nice leap for customers who wanted more than just a cellular link before leaping in.

Update II: Looks like Telus will be first to get it.

In this article: blackberry, BlackBerry PlayBook 4G LTE, BlackberryPlaybook4gLte, canada, playbook, rim, tablet
All products recommended by Engadget are selected by our editorial team, independent of our parent company. Some of our stories include affiliate links. If you buy something through one of these links, we may earn an affiliate commission.
Share
Tweet
Share