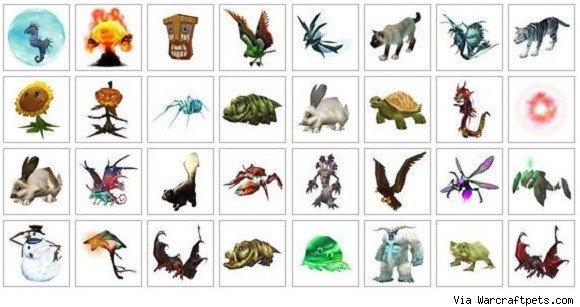 In Mists of Pandaria, our companion pets will be more than just vanity items. We'll be able to tame them, train them, and pit them against each other in Azeroth's most adorable blood sport since School of Hard Knocks.

Pet battles are brand new, but the history of companion pets stretches all the way back to the game's earliest days. These faithful sidekicks have been tagging along with us from our first characters in 2004 to the final confrontation with Deathwing. They're more than just a fluffy diversion, however. Believe it or not, some pets have actually made the real world a better place, and some have irrevocably changed WoW as we know it.

The first companion pet ever summoned by a WoW player was likely from the original Collector's Edition. The CE offered a choice among a Zergling, a Mini Diablo, and a Panda Cub. Companion pets weren't really on players' radar back then, so I'm sure anyone running around with a CE pet was asked many times how they got it.

Pets have always been sold by vendors in cities, but the vendors weren't obvious back in vanilla. It was possible to go a long time without encountering any companion pets whatsoever. I'll never forget exploring Booty Bay for the first time around level 20 and realizing I could buy a parrot. It cost 40 silver, which was probably half my money at that point, but no one else had one in my realm's Barrens in 2004. My parrot received a lot of attention.

Originally, pets were not spells cast from a UI window like they are today. They were items. They took up bag space. Pet enthusiasts devoted huge portions of their banks to their collections.

There were, of course, far fewer pets back then, and many of them were very difficult to obtain. Everyone wanted one of the tiny whelplings, which had an equally tiny drop rate. Others, like the popular Worg Pup, required completing endgame quests. Some, like the Westfall Chicken, were entirely secret unless you knew how to get them. In early vanilla, pets like these were a sign that you were a dedicated player. You knew things. You had done things. Things that resulted in pets.

The Burning Crusade upped the pet ante by offering pets as rewards from dailies and reputation grinds, as well as adding a few more low-percentage drops like the Captured Firefly and Phoenix Hatchling.

When Wrath launched, the number of pets was over a hundred, and the new achievement system gave everyone a reason to collect them. Blizzard finally got the pet items out of our banks and made them all into spells instead. During this expansion, Blizzard also introduced the idea of account-bound pets that could be shared among all of your characters. The first one was the Baby Blizzard Bear.

In Mists, pets will no longer be bound to single characters and will maul each other at your bidding.

Blizzard showers us in cuteness

Realizing how popular companion pets had become, Blizzard began offering pets for anything and everything. Nearly all holiday events now have associated pet rewards. Many achievements reward players with pets. Pets have been a part of every expansion's Collection's Edition, as well as those for StarCraft II and Diablo III. They have been rewards for attending or livestreaming BlizzCon and the Worldwide Invitational. Several of WoW's anniversaries were accompanied by pet rewards. During the 2008 Beijing Olympics, you had a chance of receiving a pet called the Spirit of Competition after winning any battleground. Pets can also be acquired from certain loot cards in the World of Warcraft Trading Card Game.

Blizzard even gave out a pet for buying an authenticator. The Core Hound Pup, incidentally, became a great way for guild officers to check whether someone had the authenticator, to prevent the guild bank from getting robbed by a hacker.

No aspect of WoW outside of the subscription itself has been more monetized than pets.

A 2009 cross-promotion with Mountain Dew earned you a Warbot pet just for visiting Mountain Dew's website. In game, you could fill your pet with red or blue "fuel." If two Warbots of opposite colors were next to each other, they would fight -- WoW's very first pet battles! The promotion was less of a hit in the EU, where it was completely unavailable.

The Warbot isn't the only soft-drink-related pet, however. When WoW launched in China in 2006, an iCoke promotion rewarded Poley, a polar bear cub.

During Wrath, someone at Blizzard figured out that they shouldn't just give all the pets (and mounts) away when people would probably pay real money for them. Thus, the Blizzard Store was born in late 2009. The first pets offered were a Pandaren Monk and Li'l KT. Half of the original monk sales were set aside for the Make-A-Wish Foundation.

These first Blizzard Store pets were a huge success. The promotion earned more than a million dollars for the charity. Strong sales led to the infamous "sparkle pony" about six months later. Blizzard has added more pets to the store over time and now also sells plush pet toys that come with in-game counterparts.

The pet that has had the biggest impact on the game is arguably the Guardian Cub, introduced in November 2011. Sold by the Blizzard Store but available to be traded or auctioned, the pet allowed players to acquire in-game gold for real-world currency. Though initially controversial, this safe alternative to buying gold from hackers has done more good than harm.