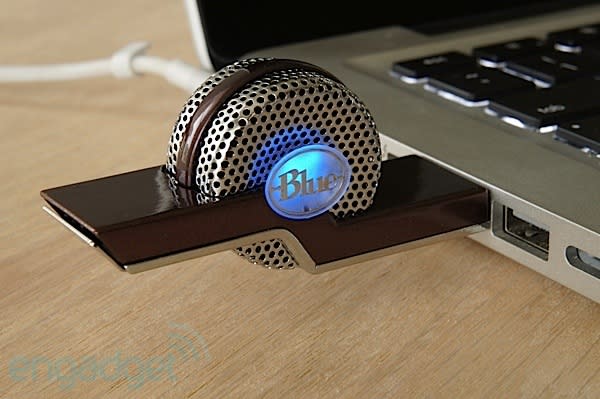 In recent years, mobile and compact recording gear has, like so many other gadget types, become smaller and smaller in stature. We've seen add-ons for smartphones and tablets that aren't much larger than a quarter, along with mobile mics that boast USB compatibility. The Blue Microphones Tiki continues the trend, offering the same premium aesthetics we've come to expect fromthe company, along with top-notch audio quality. The Tiki is said to perform at its best with Skype-style video chats and voice recording, thanks in part to an intelligent mute and noise isolation features.

Let's be honest, though. Purchasing a USB microphone for the sole purpose of video chatting will be a tough sell for most folks. People like podcasters will expect a bit more functionality from a peripheral like this. Luckily, the unit boasts a "Natural Recording Mode" that promises instrument-tracking capabilities as well. But does the Tiki handle online banter, voice recording and guitar sounds well enough to warrant a $60 purchase? And exactly how smart is the intelligent mute? Read on to see what we discovered when we gave this flash drive-sized microphone the full-on review treatment.

The Tiki brings stellar construction, dapper design and solid overall performance -- an impressive feat for a product this small and this inexpensive.

The folks at Blue know a thing or two about building stellar audio devices. From the modest Snowball all the way up to the Yeti Pro, the company's lineup of microphones boasts solid build quality, and the Tiki is no exception. The mic is wrapped in a 3-inch-long metal housing much like some of the older, pricier USB models in Blue's stable. As we've mentioned, the entire device is about the size of a thumbdrive -- the requisite connector sits on one end while a mode selector "button" lives on the opposite side. We use quotation marks because while you do press it to toggle between the Intelligent Speech and Natural Recording modes, there's really no button, per se -- you push in one end of the unit to make said change and the diminutive panel only flexes the slightest bit. Let's put it this way: color-specific mode lights are the only real feedback as to whether you've switched to the second option.

The folks at Blue know a thing or two about building stellar audio devices.

Speaking of lights, the mic implements the aforementioned LED status indicator, which lights up in different colors depending on the mic's status. With Intelligent Speech enabled, for instance, it glows orange when muted and changes to blue when it begins to pick up speech sounds. Conversely, the status light glows purple when the Natural Recording option is selected. Colored indicators are a nice touch, but we'd also like to see a physical mute switch somewhere on the unit's exterior. If this were present, we'd have an easy way of making sure our sudden coughing fits didn't end up muddying our tracks. Also included is a dock and extended USB cable for those instances when you'd rather have a bit of space between your machine and the mic -- you know, conversations with multiple persons on your end of the call and what not.

Internally, the unit carries two custom condenser capsules that are fine-tuned with advanced digital signal processing (DSP). The duo ensures that the best sound mix is captured and then sent on to your Skype pals or tracked for further processing. A pair of microphones in the kit also means that a second person can be seated across the table and be heard just as well on the recording or video call. Captured audio is CD-quality -- 16-bit, 44.1k at 40Hz-20kHz which served our talks and informal guitar-tracking sessions quite well.

As we've said, Blue claims that the Tiki's best working scenario is as a sidekick for Skype video chats. We'd say that's about right. While we wouldn't necessarily recommend buying this just for the occasional video conference, it handles this type of task quite well. As far as tracking instruments or other audio with the Natural Recording mode goes, GarageBand served our purposes just fine. With just a few clicks, we were ready to track some acoustic guitar licks with no glaring issues.

The Tiki is very much a plug-and-play device.

Setup was a breeze. Like many of the mobile recording gadgets that we've handled in the past, the Tiki is very much a plug-and-play device. There are no drivers or device-specific apps that you'll need to download in order to get started. As long and you have Skype, GarageBand or the compatible application of your choice already installed, you'll be good to go. Of course, once the mic is connected you'll need to adjust the chosen software's preferences in order to capture audio from the Tiki and not the built-in audio device on your computer.

General use and sound quality

Thanks to the plug-and-play nature of the Tiki, using it is a pleasure. We didn't encounter any performance hiccups or issues with connectivity when we plugged it directly into a laptop, or when we used the bundled dock / extended cable. While noise cancellation and voice isolation work as advertised, the Intelligent Mute feature leaves a lot to be desired. The Tiki picked up our keystrokes, mouse clicks and even the shutter of our NEX-C3 during the unboxing. Things like clearing your throat and tapping your fingers on the desk might well flip the status light to blue. In order to get a reliable mute on the tracks, we had to make use of those features offered by Skype and GarageBand, providing a stronger case for our built-in button request.

The mic was able to detect the hum from our MacBook Pro's fan.

Ambient noise was never an issue except for one memorable instance. The Tiki did well not to pick up street noise or the sound of a nearby A/C unit. We did notice, however, that the mic was able to detect the hum from our MacBook Pro's fan. This happened while we were recording with the mic plugged directly into the USB port (listen to the audio clip below to hear what we're talking about). Granted, this can easily be remedied by using the dock / extended cable to add some buffer. Speaking of range, you'll want to make sure you stay an arm's length or so away from the Tiki when recording for the best results. Moving more than two or three feet away compromises volume and overall quality of the captured tracks. This may seem like common sense, but in fact the range isn't on par with more expensive USB mics, which are capable of capturing sound across an entire room.

To be honest, we were pleasantly surprised overall by the Tiki's capture abilities. Naturally, this shouldn't be your go-to mic if you're looking to do more than Skype or record a quick demo while on the road. The sound quality is well-rounded in terms of tone and highs, while mids and lows are all adequately represented when tracking vocals (read: speaking, we'll spare the universe from our mediocre Jack White attempts) and instruments. As you can hear in the samples above, the unit provides a better EQ'd raw recording than the Apogee MiC, which lacks a bit of bass unless you make some post-tracking adjustments. You'll notice that the MiC didn't pick up our laptop's fan -- thanks in part to it not being situated so close to the computer. Both of the tracks were recorded with a 1962 Gibson J-45 acoustic guitar captured by GarageBand on a MacBook Pro and feature no post-production tweaks to the EQ or anything else. We did, however, adjust the volume so that both tracks would play back at nearly the same level, though both mics were the same distance away from the J-45 each time. The MiC did provide a crisper, clearer track than the Tiki despite its reliance on predominantly mids and highs for the undoctored captures.

For the price, you'd be hard pressed to find an all-in-one USB mic like the Tiki that will greatly outperform it or carry a truckload of additional specs. It's no secret that plenty of microphones exist for mobile tracking purposes, but they usually come with a larger hit to the ol' wallet. The Apogee MiC is a solid alternative that comes with a desktop stand, onboard gain control and compatibility with iOS devices. Of course, these perks come with a $199 price tag and the mic lacks a built-in mute switch and captures raw sound that could use a boost on the low-end EQ.

It would be difficult to find an all-in-one USB mic with better performance or specs at this price.

For those with budgets not much larger than the $60 required to snag the Tiki, Blue's Snowball mic has been the choice of podcasters for quite some time now. The $99 offering also includes a tabletop stand and can be paired with an iPad, provided you also buy Apple's $29 Camera Connection Kit that allows USB connection though the slate's dock / charger port. If your goal is having the option of mobile podcasting / tracking using the third-generation iPad, you can do said recording here for about twice as much.

If you're not in too big of a hurry, Blue's Spark Digital was announced back at CES. This particular model will feature the same dual compatibility as the Apogee MiC (iOS and USB) and will include a desktop stand right out of the box. It'll also carry the same price, as far as we know -- the $200 figure was included in the original announcement. Here's the kicker: there's no word on exactly when the Spark Digital will hit shelves, so there's also no indication as to how long you'll have to hold out.

All in all, we were pleasantly surprised by the Tiki's performance. Going in, we expected this miniature USB microphone to perform well below the likes of the Apogee MiC -- a competitor that costs more than twice as much with a longer list of specs. As pleased as we are, though, we'd like the kit even more if the Intelligent Mute mode were a bit smarter and if it had a physical mute button. Other than the range and those slight muting issues, the Tiki works as advertised, handling Skype chats and acoustic instrument recording with aplomb. If you're looking to do a bit of informal tracking or video chatting while on the road, this mic will serve you well while fitting nicely in a pocket of your rucksack. However, if you want to eventually turn those tracks into something a little more polished, you'll want to shell out more coin on a higher-end piece of kit.

Thanks to Nick Wiley for providing the guitar licks used in the audio samples for this review.

In this article: Blue Microphones, blue microphones tiki, BlueMicrophones, BlueMicrophonesTiki, mic, microphone, mobile recording, MobileRecording, peripherals, recording, review, tiki, USB, usb mic, USB microphone, UsbMic, UsbMicrophone
All products recommended by Engadget are selected by our editorial team, independent of our parent company. Some of our stories include affiliate links. If you buy something through one of these links, we may earn an affiliate commission.
Share
Tweet
Share