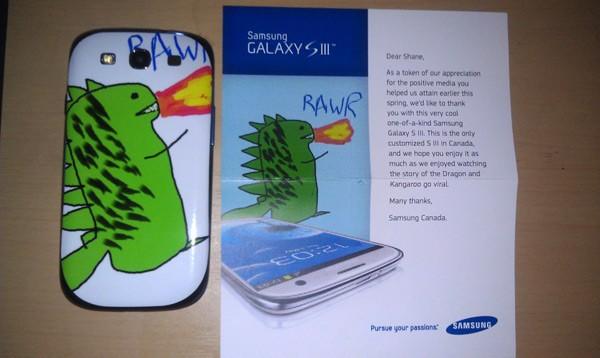 And you thought your future brown Galaxy S III would be special. We're just learning the full story of how avid fan Shane Bennett got what may be the rarest version of Samsung's flagship phone through an unusual chain of events. After half-jokingly asking Samsung Canada for a free phone with the drawing of a dragon as a token gift, Shane was given a kangaroo drawing as a response; the overwhelming reaction to his posting that story on Reddit led to not just a thank-you trip to a Galaxy S III launch party but a custom phone designed around his off-hand doodle. We're not kidding when we mean custom, either. Along with the distinctive front and back, his phone came with matching on-screen wallpaper and even a specially wrapped box. The likelihood of anyone else receiving a similar gesture is slim -- who'd want to spoil the originality? -- but credit has to go to community manager Drew Bomhof for going the extra distance and acknowledging that even a giant phone maker is only as strong as its individual customers.

In this article: android, cellphone, cellphones, custom, customized, galaxy s 3, galaxy s iii, GalaxyS3, GalaxySIii, google android, GoogleAndroid, minipost, mobilepostcross, mobilepostmini, one of a kind, one-of-a-kind, OneOfAKind, samsung, samsung galaxy s 3, samsung galaxy s iii, SamsungGalaxyS3, SamsungGalaxySIii, smartphone, smartphones, unique
All products recommended by Engadget are selected by our editorial team, independent of our parent company. Some of our stories include affiliate links. If you buy something through one of these links, we may earn an affiliate commission.
Share
Tweet
Share