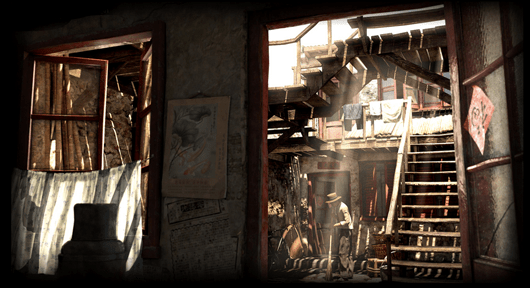 A new website for LA Noire dev Team Bondi's next game, Whore of the Orient, popped up this morning (as discovered by OPM), along with new information about the barely mentioned "great untold story." The game is headed to "next generation games consoles and PC" with Warner Bros. Interactive as publisher.

The game's set in 1936 Shanghai, China – "Whore of the Orient. Paris of the East," as the website calls it. A "group of Western cops hopelessly trying to keep the lid on and keep the peace" seems to be the focal point of the game (the group's known as the "International Police Force"), though it's unclear exactly what kind of game it is. It sounds to be just as hard-boiled as Team Bondi's last effort, LA Noire, and the gritty look of the image above incurs the same comparison.

Team Bondi leader Brendan McNamara is once again at the head of the project, leading the remnants of LA Noire's dev team picked up by Kennedy Miller Mitchell.
In this article: brendan-mcnamara, kennedy-miller-mitchell, kmm, pc, team-bondi, warner-bros-interactive, warner-brothers, warner-brothers-interactive, wbie, whore-of-the-orient
All products recommended by Engadget are selected by our editorial team, independent of our parent company. Some of our stories include affiliate links. If you buy something through one of these links, we may earn an affiliate commission.