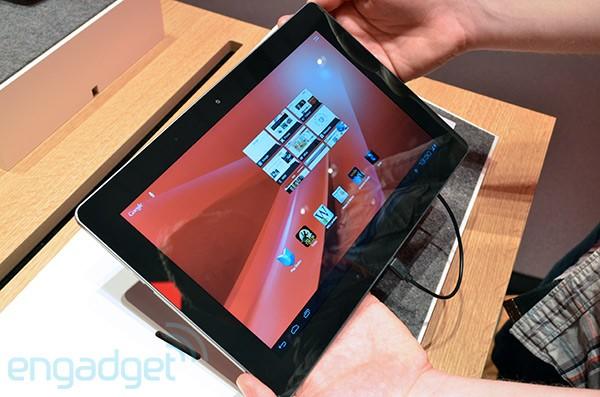 Hey, check this pair of tablets from Lenovo that were hanging out in the Vodafone booth here at IFA. The slates are actually branded with the carrier's name as the Vodafone Smart Tab II, the successor to Smart Tabs created last year by handset maker ZTE. The Smart Tab II has quite a nice build quality, and from the front it has a display that looks to match the level we've come to expect from the likes of Samsung. The rear, meanwhile, is covered with circular indentations, like a golf ball, with a large Vodafone logo at its center and small gray Levono one along its bottom.

The Smart Tab II comes in both a 7- and 10-inch varieties, which do a pretty good job covering the mainstream tablet spectrum. We reached out to Lenovo to ask whether they might be a rebranding of existing devices, and hear that they apparently have yet to go on sale. We're hoping to see them here in the US at some point, particularly in the case of the Smart Tab II 7-inch, which adds functionality compared to certain other seven inchers, offering up a rear facing camera -- although it's only two-megapixels in this case.

And while the build quality is quite solid on both, the 10 feels a lot thinner and sleeker in-hand. The larger tablet has 16GB of storage a 1.5GHz dual-core and is running Ice Cream Sandwich. The seven inch tablet is also running Android 4.0 and has 4GB of memory built in, priced at 190 Euros. Both devices have built-in GPS. Check out a video of them after the break.

16
In this article: android, ice cream sandwich, IceCreamSandwich, ifa, ifa 2012, Ifa2012, lenovo, lenovo smart tab, lenovo smart tab ii, LenovoSmartTab, LenovoSmartTabIi, smart tab, smart tab ii, SmartTab, SmartTabIi, video
All products recommended by Engadget are selected by our editorial team, independent of our parent company. Some of our stories include affiliate links. If you buy something through one of these links, we may earn an affiliate commission.
Share
Tweet
Share