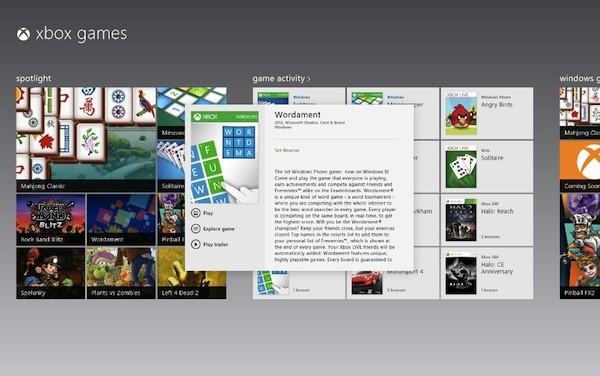 Been wondering what your gaming options will be when you first take a new Windows 8 PC or Windows RT tablet out of the box? Microsoft has confirmed today that its first wave of Xbox titles (as they're now known) for the OS will include 40 games, 29 of which come from Microsoft Studios. Those include quite a few familiar titles like Angry Birds (and Angry Birds Space), Cut the Rope, Fruit Ninja and Jetpack Joyride, as well as the old mainstays like Solitaire, Minesweeper and Mahjong -- anyone hoping for the likes of a Halo or Gears of War title are out of luck for now, though. As we'd heard previously, all Xbox games will be accessible from within the pre-installed Games app, and they'll each boast most of the Xbox Live features you'd expect, including achievements and leaderboards. You can find the full list after the break, and Microsoft promises that more will be added "through holiday and beyond."

In this article: games, gaming, microsoft, microsoft studios, MicrosoftStudios, windows, windows 8, windows rt, Windows8, WindowsRt, xbox
All products recommended by Engadget are selected by our editorial team, independent of our parent company. Some of our stories include affiliate links. If you buy something through one of these links, we may earn an affiliate commission.
Share
Tweet
Share