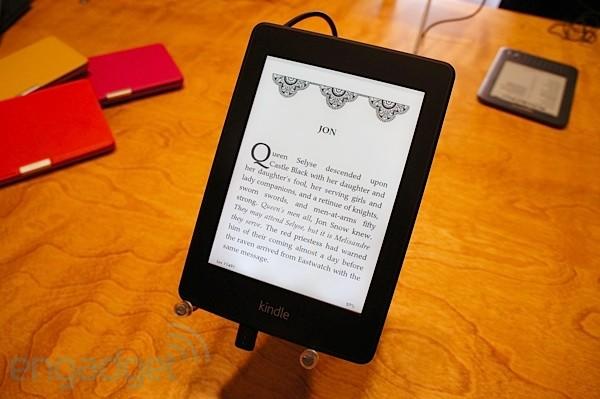 Of course, today's event wasn't just about the Fires. Amazon's still got a dog in the devoted e-reader race as well. The big news here, of course, is the company's entry into the world of lighted E Ink readers -- coming several months after the release of Barnes & Noble's own Nook Simple Touch With GlowLight. The front-lit technology here is proprietary, of course. Amazon mentioned some four years in R&D on glowing alone. And the difference is pretty immediately clear: it's all about distribution. Looking at the Nook for a second, you can immediately isolate the top as the light source, with a stronger concentration and somewhat even distribution. The Kindle's light however, is hard to spot, thanks in part to a much thinner bezel: you can't just angle the reader and see the lights here.

Hold the new Kindle up to the old and something else is immediately obvious: there's a reason the company is calling this thing the Paperwhite. The contrast is like night and day here. That tinted display we've become accustomed to has been traded in for something much lighter, and the text is that much sharper. There's a reason Amazon went hog wild with the font styles and sizes: they're all visible here. Also, at first glance, there doesn't seem to be any degradation in sharpness due to the addition of glow technology, which we saw in the new Nook.

The glow is quite bright, even with the lights on -- we get Amazon's point about wanting to keep it on at all times, so that increased battery life (eight weeks with the light on) is certainly a huge bonus here. We find ourselves turning it on and off a lot with the Nook -- not here. Adjusting the light is also quite nice, with a dimmer switch that runs up and down and a whole lot of brightness levels.

The reader also just looks better. Physical buttons have been dropped altogether here (which is either a curse or a blessing, depending on who you ask) and the reader is a bit shorter and thinner than its predecessor. In place of the menu button is a white Kindle logo along the bottom bezel. The silver of the last version has been dropped for a matte black, which is really just nicer to look at, with a rubberized back that makes it harder for it to slip from your hands. Weight-wise, we're talking roughly the same ballpark as the Kindle Touch. We still prefer the Nook's trademark design for long-term reading -- one of the downsides of a smaller bezel is that there's less place for your fingers to go. And while there's an indented Kindle logo on the back, we still prefer the Nook's concave rear.