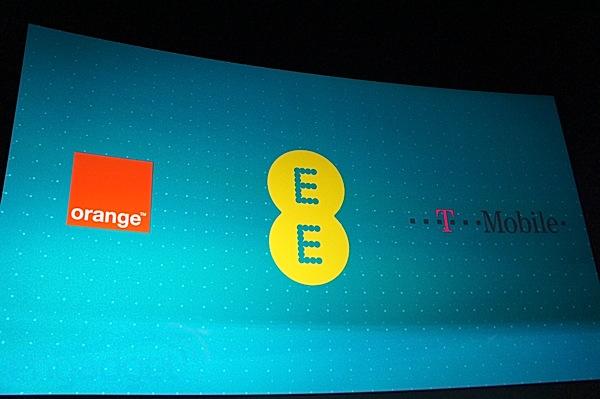 Finally, after gaining approval from UK regulator Ofcom, Everything Everywhere announced today that it's calling its incoming 4G service EE. It's a new company, new network and a new brand, we're being told here at London's Science Museum. Officially formed of the combined network might of Orange and T-Mobile, the union has been allowed to use 4G services on its 1800 MHz spectrum starting today, although we're still waiting to hear precisely what hardware will be compatible with the UK's first LTE network. EE will also start offering a fiber service.

Orange and T-Mobile will still exist, with the colored carrier concentrating on giving customers "more from their phone" (whatever that consists of), while T-Mobile will appeal to customers chasing value. We've been told both 4G and fiber offerings will be launching soon, though this will also depend on hardware availability. We're also hoping there will be more on the cards than just a WiFi dongle, but more as we get it. The first cities to get the service are London, Cardiff, Birmingham and Bristol, with 16 more launching by the end of the year -- including the likes of Manchester and Southampton. EE puts that at covering a third of the population of the UK.

We were given an ever-so brief glimpse at incoming devices for the new 4G service -- Brits can expect to pick up devices from Samsung, Nokia, Huawei and more "in the coming weeks" -- the same timeframe that with encompass the launch of the network to its customers after testing. (The offering from EE will also include MiFi and USB dongles.) It even dropped a iPhone-tinged "one more thing" that more devices are incoming. Possibly something we'll hear about tomorrow. A new company, a new network, a new brand

• EE to become the UK's most advanced digital communications company
• EE network switched on today
• EE's new customer brand to launch in the coming weeks with pioneering
superfast 4G LTE mobile services and fibre broadband
• EE's superfast 4G service to launch in 16 cities by Christmas, covering 20
million people – a third of the population. Nationwide 4G roll out to accelerate
through 2013 with 98% of UK population covered in 2014
• EE's superfast fibre broadband service to reach more than 11 million
households and businesses by end of year
• Over 700 EE-branded stores to open – more than any other operator
• Orange and T-Mobile customers to benefit from the UK's biggest and best
mobile network, and more stores than ever before

EE will also be launched as a new superfast customer brand in the coming weeks. It
is a brand born in the digital age, designed to serve both consumers and businesses,
offering the UK's only 4G mobile service and complemented by fixed-line fibre
broadband.

The new EE brand will stand alongside Orange and T-Mobile. Together they will
provide mobile services to 27 million people, now served by the UK's biggest and
best network.

Olaf Swantee, CEO of EE said: "Today we launch a new company, a new network
and a new brand for Britain.

"Our plans to revolutionise the UK communications market with a faster network and
an exciting new brand for the digital age are built on solid investment and a simple
belief that customers deserve better.

"We look forward to connecting the country with superfast mobile speeds in the
coming weeks, months and years.

"And it starts today, with the announcement of our new business, our new brand and
a new digital infrastructure that our company, our customers and the country can be
proud of."

The EE customer brand will launch with 4G services for consumers and businesses
in the coming weeks.

It will be the first brand in the country to offer a mobile 4G service – the pioneering
new technology that offers superfast mobile internet at speeds typically five times
faster than 3G speeds today.

It means that EE's 4G customers will be the first in the UK to enjoy superfast speeds
on their mobile and at home or at work.

With superfast 4G mobile, customers will be able to:
• Access the web on the go without waiting
• Download high-definition movies in minutes
• Watch live TV on the move without buffering
• Play live multiplayer games on the go
• Download large email attachments quicker than ever
• Make high quality video calls on the move

Four cities – London, Bristol, Cardiff and Birmingham – are switched on today for the
company's engineers to begin live testing and systems integration, in readiness for
the customer launch.

EE's 4G network will cover a third of the UK population in 2012 – over 20 million
people – and customers on the EE brand will also have access to the largest 3G
network in the UK outside of the 4G cities. Further towns, cities and rural areas, will
follow rapidly with 2013 population coverage to reach 70%, with 98% covered by
2014.

EE's 2012 launch schedule will see 16 areas of the country connected to 4G by
Christmas – the UK's four capitals and twelve other major cities. The 16 cities are
London, Edinburgh, Cardiff, Belfast, Birmingham, Bristol, Derby, Glasgow, Hull,
Leeds, Liverpool, Manchester, Newcastle, Nottingham, Sheffield and Southampton.
EE will offer a range of state-of-the-art devices alongside its superfast 4G mobile
network with more to be announced shortly.

Today, EE confirmed it is to launch the following 4G devices:

Samsung Galaxy SIII LTE
– with a 4.8 inch HD Super AMOLED display, you can
watch videos on your mobile like never before. Innovative Smart Stay automatically
recognises when you are looking at the phone, maintaining a bright display for
continued viewing pleasure.

The HTC One XL – high quality entertainment and precision navigation combine in
this handset, thanks to a large 4.7" HD touchscreen display. Full HD video, and front
and rear facing camera let you capture crisp, vivid photos and movies in high quality
wherever you are.

Huawei Ascend P1 LTE – a powerhouse dual-core processor is packed in to this
handset's slim design. Take stunningly clear images or HD videos on an 8MP
autofocus camera with LED flash and playback on the 4.3" high-res touchscreen.
Huawei E589 Mobile WiFi – hook up to five devices to the EE 4G network, making
your existing phone, laptop or digital screen superfast even if they're not 4G. Long
battery life of up to 10 hours, enjoy 4G wireless broadband anytime, anywhere.

Huawei E392 Mobile Broadband stick – download and upload documents and files
in super quick time on the go with this device. Make your laptop mobile and
superfast, by hooking it up to the EE network. You'll stay compatible with 3G too and
seamlessly switch to the optimal connection.

The company also announced it is to open EE-branded stores with more than 700
being unveiled across Britain's high streets in line with its customer brand launch.
The new EE stores – formerly Orange and T-Mobile shops – will serve customers of
all three brands, giving them access to service and sales in twice as many locations
as before.

More than 10,000 EE staff have been trained, and will offer specialist advice in store,
on the phone and on-line. The company has trained its Customer Team staff to
become experts in mobile operating systems, meaning its customers will get a
specialist service, regardless of which device they use. It is the only operator to offer
dedicated expertise based around device operating systems.

The EE network – which launches today – has been created by bringing together the
former 3G and 2G networks of Orange and T-Mobile, coupled with a three-year
£1.5bn investment for upgrades and new 4G services.

Orange and T-Mobile customers will continue to benefit from the best 3G and 2G
mobile network.

It means that from today – and over the coming months – customers using Orange
and T-Mobile will begin to see their phone signal indicator change to EE, whether
they are on 3G or 2G, showing that they are on the UK's biggest and best network.
This is at no extra cost and there are no changes to their existing price plans.

In this article: 4G, 4G LTE, 4gLte, EE, Everything Everywhere, EverythingEverywhere, LTE, Orange, T-Mobile, UK
All products recommended by Engadget are selected by our editorial team, independent of our parent company. Some of our stories include affiliate links. If you buy something through one of these links, we may earn an affiliate commission.
Share
Tweet
Share