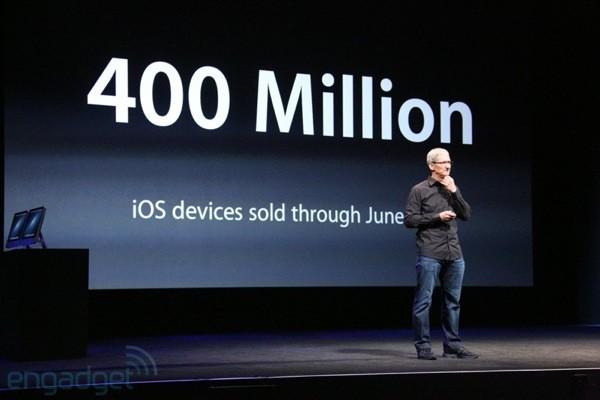 Wondering just how well Apple's iOS device sales have been faring versus their Android counterparts? CEO Tim Cook has just revealed that Apple has sold (not just shipped) 400 million iOS devices from the 2007 launch through to June 2012, a hike from the 365 million it reported at WWDC. For context, Google's Andy Rubin mentioned just Tuesday that a total of 500 million Android devices had been activated, although the gap may be closer than implied at first: there's been a few months between then and now, after all. Still, the new tallies show that Google wasn't waiting for the iPhone 5 to quicken its pace, even if Apple's sales are still very brisk.

In this article: android, andy rubin, AndyRubin, apple, apple iphone, AppleIphone, cellphone, cellphones, google, google android, GoogleAndroid, iphone, iphone 2012, iphone 2012 event, iphone 5, Iphone2012, Iphone2012Event, Iphone5, iphoneevent2012, mobile, mobilepostcross, smartphone, smartphones
All products recommended by Engadget are selected by our editorial team, independent of our parent company. Some of our stories include affiliate links. If you buy something through one of these links, we may earn an affiliate commission.
Share
Tweet
Share