HP's Envy 14 Spectre hit almost all the right notes when we reviewed it back in March, thanks to its high-res display, sleek metal-and-glass design and brisk performance, but a stiff trackpad and the steep $1,400 price were clear downsides. The new Envy Spectre XT, a 13.3-inch Ivy Bridge-powered Ultrabook, has a thinner, lighter profile than its big brother, and a lower $1,000 price tag to match. That's still not chump change, though, so does the XT deserve a spot in the top tier of Intel-approved ultraportables? Join us past the break for the full breakdown. %Gallery-165035% 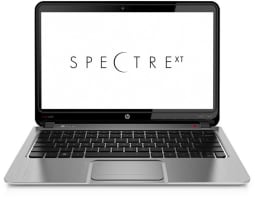 The Spectre XT has the trappings of a higher-end Ultrabook, including an all-metal design with a brushed silver finish on the lid and keyboard deck. HP carried over some familiar elements from its fuller-bodied Envy 14 Spectre, which weighs 3.97 pounds, compared to 3.07 for the XT. However, this model's aluminum lid is decidedly more elegant than the original Spectre's glossy black top. You'll find the same backlit chiclet keyboard, a reflective (rather than glowing) logo on the lid and the Hewlett-Packard name brandished across the hinge. Additionally, Beats Audio branding sits prominently on the laptop's speaker grille, with the red logo standing out amid all that silver.

All told, the Envy Spectre XT feels quite good in the hand. The rounded corners are eminently grippable and the soft-touch bottom is delightfully smooth, but not too slippery. The whole package feels sturdy, too, though the screen is a bit wobbly. The machine tapers slightly, from 0.69 inches to 0.57 inches thick, which manages to give it a sleek feel even though its silhouette isn't as pointed as the MacBook Air (0.86 to 0.11 inches thick) or as skinny as the 0.3-inch ASUS Zenbook Prime UX31A or 0.5-inch Samsung Series 9.

HP outfitted the XT with a no-surprises selection of ports: two USB 3.0 connections, an SD card slot, combination headphone-out / microphone-in jack, Ethernet and HDMI. There's no DisplayPort as on the Envy 14 Spectre, and you can naturally forget about an optical drive.

The Envy Spectre XT's black, island-style keyboard offers decently sized keys that respond to input with a satisfying clack. You'll enjoy much more travel on this layout than on many other Ultrabooks, which seem to be plagued with shallow keyboards. In everyday use, we made very few spelling mistakes, and didn't notice much, if any, flex. Like the Envy 14 Spectre and HP Folio 13, the XT sports a backlit keyboard, with a separate LED under each key. The layout is pretty much identical to what you'll find on the original Spectre, with shrunken arrow keys standing out as the only undersized elements.

The touchpad feels much more fine-tuned than what we've seen on previous HP systems.

While keyboard quality remains consistent between the XT and its older brother, the trackpad on this thinner system is a welcome improvement. The Synaptics clickpad did right by us, allowing for smooth two-finger scrolling without resistance or any noticeable lag. Pinching to zoom is also easy to execute, and the pad wasn't overly sensitive in performing this gesture, a problem we found on the original Spectre. The built-in buttons, too, are accurate and responsive. Overall, the touchpad feels much more fine-tuned than what we've seen on previous HP systems, and that's definitely something to write home about. One carryover from the company's previous laptops is the trackpad-disabling feature, which lets you disable the clicker by double-tapping an icon on the pad's upper-left corner. You'll see a glowing orange LED when the pad is turned off.

The Spectre XT's 1,366 x 768 display isn't exceptionally crisp and clear, but colors appear plenty vibrant. As to be expected with a glossy, non-IPS screen, viewing angles are limited. Images begin to wash out when you move even a smidgen to the left or right of center, and tipping the lid a bit forward renders content on the display unviewable. That's not to say this is the most glare-ridden panel we've contended with, but it makes us appreciate the Envy 14 Spectre's screen all the more. In a perfect world, HP would carry over that pixel count without raising the price, but that's not going to happen any time soon.

Beats Audio is a given on most HP machines and that usually means a better listening experience than what you'll get on your average laptop. That said, we aren't blown away with the sound quality on the Spectre XT. Though the machine offers ample volume, songs come through tinny and canned. We can't knock HP too hard for this: beefier machines such as the Envy 15 have room for a subwoofer, and that's just not a possibility on this Ultrabook. Two of the XT's speakers are placed on the underside of the machine, which might explain the muffled audio. (There are also speakers on the front grille.) With headphones plugged in, you'll get the Beats benefit; music sounds richer, and there's a satisfying amount of bass.

A Core i5 Ivy Bridge processor, 4GB of RAM and a 128GB SSD hint at a high-performing Ultrabook, and the Spectre XT does pretty darn well in synthetic benchmark tests. In PCMark Vantage, the system notched a score of 12,223, which bests the Envy 14 Spectre by nearly 3,000 points. Among Ivy Bridge Ultrabooks, too, that's a solid showing. The ASUS Zenbook Prime UX31A and the Acer Aspire S5 are in the same ballpark, with scores of 12,494 and 12,895, respectively. In the disk benchmark ATTO, the XT delivered max read speeds of 520 MB/s, while writes topped off at 265 MB/s. Those numbers are impressive -- about on par with the Samsung Series 9's performance, though both fall short of the Aspire S5's mind-blowing 875 MB/s reads and 700 MB/s writes.

Champ performer though this system may be, it's an Ultrabook with Intel HD Graphics 4000, and there's only so much you can do without a discrete chip. Still, the Spectre XT fares considerably better than its competitors in 3DMark06, knocking out a score of 5,197. That trumps the UX31A (4,989), pulls in well ahead of the Envy 14 Spectre (3,468) and falls 630 points short of the MacBook Air (5,827).

Suffice to say, those strong benchmark showings translate into swift real-word performance. Cold-booting into Windows 7 Home Professional takes a breezy 16 seconds, and waking from sleep takes about three. Not only do those times feel refreshingly speedy, they hold their own against top-performing Ultrabooks, such as the MacBook Air (15 seconds) and the Sandy Bridge-equipped ASUS UX31 (16 seconds).

The Spectre XT can satisfy a casual gaming habit, but firing up graphically intensive titles like Call of Duty will push this guy to the limits. We saw a modest 20 frames per second in this game, and the fan started acting up merely minutes into our fragging. In World of Warcraft, the frame rate hovered around a playable 60 fps. Here too, though, the fan began to whir and we felt the XT getting a bit toasty.

The XT's four-cell lithium-ion battery lasted four hours and 57 minutes on our video rundown test, which involves playing a locally stored video on loop with WiFi on and display brightness set to 65 percent. That runtime falls a bit short of average for the Ultrabook category, and it's 33 minutes less than the Envy 14 Spectre's showing. The earlier HP Folio also lasted longer: six hours and eight minutes. Needless to say, it's one of the biggest reasons you might consider a competing Ultrabook instead.

HP continues its tradition of generous (and actually useful!) software pre-loads with the Envy Spectre XT. The company includes full versions of Adobe Photoshop Elements and Premiere Elements, plus a complimentary two-year subscription to Norton Internet Security 2012. Lest you think HP is a complete angel, though, you'll still find a healthy serving of bloatware. Pre-installed programs include CyberLink YouCam, a suite of card and casino-style games. There's also HP's selection of utilities, including Support Assistant and Recovery Manager, which make themselves a little too known through pop-ups. (One word: disable.)

Like other Envy laptops, the XT comes with a two-year limited hardware warranty. Support includes 24 / 7 phone support and parts and labor coverage. Nothing shocking here, but HP does compare favorably to other PC vendors in this department. Dell and Toshiba, for instance, offer only one year of coverage, and extending warranties can cost up to nearly $199.

Assuming you want to stay in the XT's price range, you'll find a couple 13- to 14-inch Ultrabooks with similar features under the hood. One such option is the Toshiba Portégé Z935, an Ivy Bridge refresh of the Z835 with a Core i5 CPU, 6GB of RAM, a 128GB SSD and a backlit keyboard. Looks-wise, the plain-Jane Portégé can't hold a candle to the XT, but it does weigh a lighter 2.47 pounds.

If high pixel density is on your list of priorities, the $1,069 ASUS Zenbook Prime UX31A, with its brilliant 1,920 x 1,080 IPS display, could make a strong case for your money. It weighs 2.86 pounds, boasts an attractive all-metal design and turns in solid benchmark scores, and its other specs stack up with the XT's: a Core i7 CPU, 4GB of RAM and a 128GB SSD. The downside is a finicky touchpad -- HP's machine is clearly superior in that regard.

And if you're curious why the $1,400 Envy 14 Spectre warrants a $400 premium over the XT, well, it doesn't, necessarily. Yes, this machine stands out for its scratch-resistant Gorilla Glass lid and 14-inch 1,600 x 900 display, but a high-res screen can be had for a lower price. Other specs match up closely with the XT's, including Core i5 and i7 processor options and up to a 256GB SSD, but its clickpad is decidedly inferior.

Short battery life and weak audio dampen our enthusiasm slightly, but ultimately the XT is one of the best Ultrabooks available right now.

Finally, we'll briefly touch on a yet-to-be-released option that could give those of you interested in the XT pause. HP recently announced the Spectre XT TouchSmart, a 15-inch version of the Ultrabook reviewed here which boasts a touchscreen -- and a 1080p IPS panel at that. Naturally, the TouchSmart will run Windows 8, and it weighs a more substantial 4.77 pounds. The MSRP is also a costlier $1,400, though that's hardly a surprise given the premium features.

The Envy Spectre XT is a good Ultrabook on its own, and an even better one when you consider how HP improved upon the already-appealing Envy 14 Spectre. A refined, responsive touchpad, even brisker performance and a more palatable price make this a prime contender for the contents of your wallet. Unimpressive battery life and weak audio dampen our enthusiasm slightly, but ultimately the XT is one of the best Ultrabooks available right now. If you want a touch-enabled, higher-res display -- and your pockets run deep enough -- you may want to wait it out for the XT TouchSmart, but among 13-inchers, this system gets our stamp of approval.