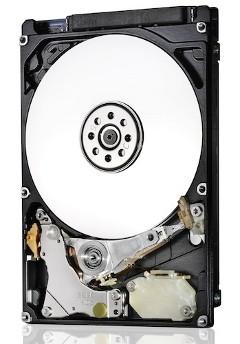 With certain exceptions, talk of advanced hard drive technology regularly has a tough time escaping research labs. Western Digital's HGST is promising a much more tangible project that could boost data capacities by a wide margin. By filling the gaps between drive platters with less buffeting-prone helium instead of air, HGST can safely fit as many as seven platters in a typical, 3.5-inch desktop hard drive instead of the current five. Going with the lower density gas creates a raft of side benefits, such as fitting more data on a single platter along with reducing the drag that both slows down and heats up the disk. We'll have to wait until 2013 to see shipping helium-filled drives in our PCs; given the slightly exotic nature of the technique, though, we wouldn't count on HGST or Western Digital handing out drives for free like balloons at a birthday party.

With products expected in 2013, the new platform enables HGST to go beyond its award-winning five-platter design, providing a path for higher capacity storage and lower customer TCO for years to come. With industry-wide challenges in scaling current areal density technologies, this new platform allows HGST to design seven-platter drives in a standard 3.5-inch form factor that will cost-effectively extend the capacity and cost-per-gigabyte curve for many product generations to come. In addition, the inherent benefits of the platform, including the helium fill, allow HGST to significantly improve datacenter TCO on virtually every level: capacity, power, cooling and storage density.

With the explosion of data resulting from mobile devices, Internet services, social media and business applications, corporate, cloud and big data customers are constantly looking for ways to improve their storage infrastructure costs and their bottom line. Also, new storage models, such as cold storage, are evolving in ways that require enormous amounts of data to be stored and available within a moment's notice. These hyperscale datacenters must deploy massive amounts of storage with the best TCO to help them manage their costs and growing storage needs. And when it comes to TCO, numbers matter most – cost-per-terabyte, watt-per-TB, TB-per-system weight and TB-per-square foot.

The density of helium is one-seventh that of air, delivering significant advantages to HGST's sealed-drive platform. The lower density means dramatically less drag force acting on the spinning disk stack so that mechanical power into the motor is substantially reduced. The lower helium density also means that the fluid flow forces buffeting the disks and the arms, which position the heads over the data tracks, are substantially reduced allowing for disks to be placed closer together (i.e., seven disks in the same enclosure) and to place data tracks closer together (i.e., allowing continued scaling in data density). The lower shear forces and more efficient thermal conduction of helium also mean the drive will run cooler and will emit less acoustic noise.

"The benefits of operating a HDD with helium fill have been known for a long time. The breakthrough is in the product and process design, which seals the helium inside the HDD enclosure cost effectively in high-volume manufacturing," said Steve Campbell, chief technology officer at HGST. "We are excited about the introduction of this platform, which demonstrates HGST technology leadership and is the result of more than six years of development in materials science, mechanical engineering and process technology. Thanks to the hard work of our research and engineering teams, our initial pilot lines are up and operational, putting HGST in position to introduce this technology first into the market."

"As a technology innovator, HGST continues to invest in multiple R&D efforts that will help us win new customers, gain deeper market penetration and deliver a significant return on investment for our customers," said Mike Cordano, president of HGST. "Our new breakthrough platform delivers unprecedented innovation with new features optimized to meet the performance, scalability, efficiency and TCO demands of both corporate and cloud datacenters, which could not be achieved using conventional techniques. With these improvements, customer interest has been positive and we look forward to qualifying our new drives in 2013."

The new, helium-filled sealed-drive platform is being demonstrated today at the Western Digital Investor event in Irvine, California. At the event, HGST is comparing the power consumption between a helium-filled drive and an equivalent air-filled drive side-by-side, demonstrating a reduction in power consumption for the helium-filled drive of 23 percent. Taking into account the extra capacity coming from two additional disks, the improvement in watts-per-TB is 45 percent. In addition to consuming less power, the drive operates four degrees Celsius cooler, requiring less cooling in the system rack and data center. This reduction in power and associated cooling cost significantly contributes to the lower TCO of the helium-filled platform. The critical watt-per-TB metric will further improve over time as the helium-filled drive platform enables significantly higher drive capacities in future product generations.

HGST will release specific capacities points and product specifications when the platform launches in 2013.

In this article: disk, hard disk, hard disk drive, HardDisk, HardDiskDrive, helium, hgst, Hitachi Global Storage Technologies, HitachiGlobalStorageTechnologies, platter, platters, storage, wd, western digital, WesternDigital
All products recommended by Engadget are selected by our editorial team, independent of our parent company. Some of our stories include affiliate links. If you buy something through one of these links, we may earn an affiliate commission.
Share
Tweet
Share