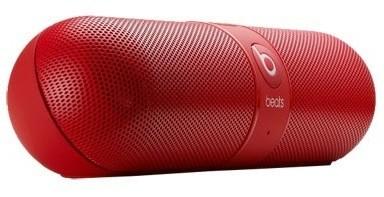 The Beats by Dr. Dre badge has usually been attached to headphones and the occasional laptop or smartphone. We've never really seen it attached to dedicated speakers, however, and that's where both an FCC filing and a sighting at UK retailer HMV's online store raise a few eyebrows. The House that Dre Built appears on the edge of launching the Beats Pill, a Bluetooth wireless speaker with four drivers and a shape that more than explains the medicinal name. While we don't know just how much of that signature Beats thump we'll get, we do know from the FCC that the Pill can serve as a speakerphone, carries an aux-in jack and will last for a typical 8.5 hours on its USB-rechargeable lithium-ion battery. There's also signs of a red version of Beats' Mixr headphones coming at the same time. HMV has publicly scoured its pages of any trace of a ship date or price for the Pill, but cached copies point to a £170 ($276) price and a release around September 28th -- not necessarily trustworthy figures, but they may be in the ballpark. Our only question is whether or not we'll get a dose of the Pill in the US.