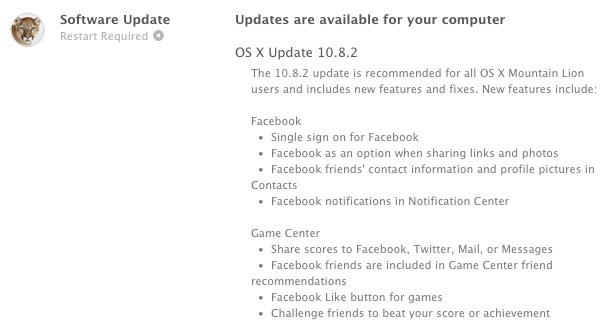 Looks like one major software update wasn't enough, as Apple is following its push of iOS 6 with OS X 10.8.2. Weighing in at 697.54MB, it's a pretty substantial update for Mountain Lion users, with that long-awaited Facebook integration chief among the changes. As Twitter presently operates within the OS, Facebook will now too enjoy single sign-on simplicity, and all of OS X's sharing portals will now include Facebook as an option. You'll get Facebook notifications in Notification Center, and you can share Game Center scores with your Facebook pals. It's also being reported that this build restores laptop battery life levels to those seen with Lion.

Other new features include the addition of Power Nap for the Late 2010 MacBook Air, a few iMessage tweaks (iMessages sent to your phone number will now appear on your Mac), a new shared Reminders list and the ability to receive FaceTime calls initially sent to your phone number. Passbook users will also enjoy the newfangled ability to add passes right from Safari and Mail, and Dictation now understands Mandarin, Cantonese, Spanish, Korean, Canadian English (!), Canadian French and Italian. We're installing the update now, and you can peek the full changelog after the break. Feel free to toss your post-install impressions in comments as well.

This update is recommended for all OS X Mountain Lion users, and includes new features and fixes:

In this article: apple, facebook, game center, GameCenter, imessage, mac, mountain lion, MountainLion, os x, os x 10.8, os x 10.8.2, OsX, OsX10.8, OsX10.8.2, update
All products recommended by Engadget are selected by our editorial team, independent of our parent company. Some of our stories include affiliate links. If you buy something through one of these links, we may earn an affiliate commission.
Share
Tweet
Share