Back in early 2001, my last year of high school was laced with an addiction: I just couldn't stop playing Phantasy Star Online. I know, it's not exactly the sort of thing worthy of an after-school special or a heart-warming episode of Blossom. Still, I churned away many, many hours with friends – some I knew personally, others I'd only met online – slaying dragons with my Lavis Cannon and grinding my HuCast all the way up to level 100.

Playing Phantasy Star Online 2 on the PlayStation Vita and Android at the Tokyo Game Show instantly evoked those old memories and, honestly, it's a little terrifying. As someone who works from home, the fact that a game like this could always be within arm's reach is deeply worrying. 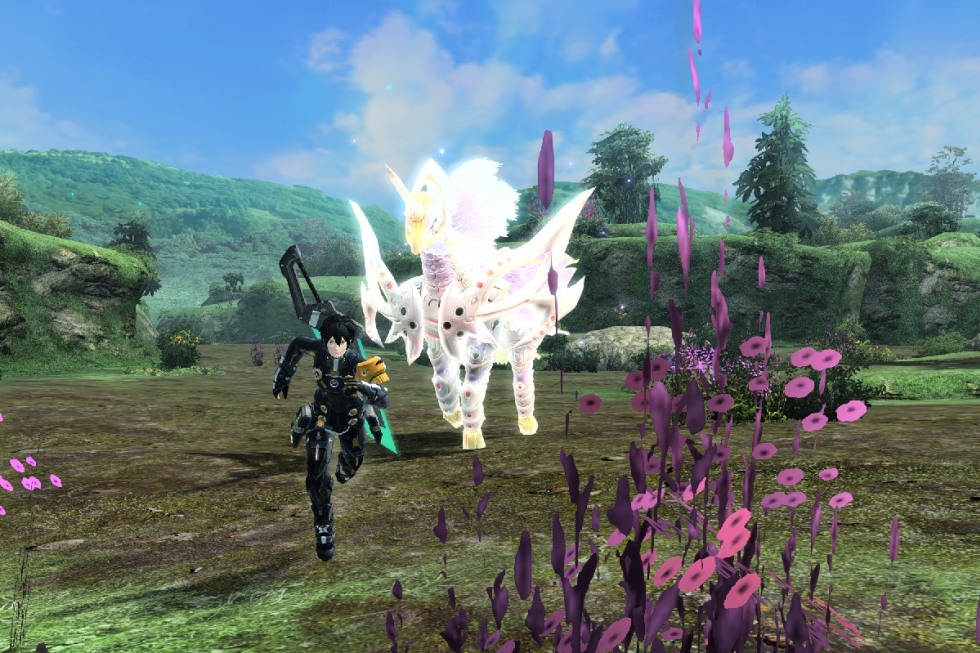 I played as a Ranger Cast (RAcast) which is a fancy way of saying a robot with a big gun. Wielding a mighty cannon, I quested through the forest with co-Joystiqer Jordan Mallory.

Phantasy Star Online 2 doesn't seem to stray very far from the formula set down by the original. As a group, players quest through colorful dungeons, destroy monsters and collect loot. As in the original, combat plays out in real time, with carefully timed button presses unleashing longer and more powerful combos. Simply mashing the button won't accomplish much of anything, but waiting for the visual cue – a circle that closes on your character – will result in a combination that allows players to attack more often and deal out more damage.

The right shoulder button shifts between two sets of abilities. My ranger had a regular shot, a more powerful shot, a burst attack and a particularly devastating special maneuver that sent his shots into the air before they came raining back down. Working together with other TGS attendees, we felled several nasty beasts – no Rappies, that I can recall – and made our way to the den of a massive dragon.

The dragon took a lot of punishment, and was no slouch in dealing out plenty of its own. The touch screen provided quick access to healing items and buffs for my teammates, which I eventually learned to make use of after the dragon repeatedly burnt my poor bot to a crisp. After chipping away at the dragon's health for quite some time, during which it underwent several transformations, we finally murdered the monstrosity.

Had it been 2001, victory would have meant a quick bathroom break before continuing onto the next dungeon, but at TGS 2012, it meant our demo was over. That didn't stop me from playing even more Phantasy Star Online 2, however, as I immediately walked right back into the booth and tried out the mobile version on Android (it's also coming to iOS).

The language barrier was a bit more of a hindrance here, as the mobile version plays quite differently from its PC and Vita counterparts, and the copious amounts of Japanese text weren't doing me any favors. From what I could gather, however, the mobile version seems like a condensed version of Phantasy Star Online 2, offering basic bits of action but not the full experience.

Rather than giving players a full world to explore, the mobile version has players navigate a dungeon by repeatedly choosing one of three paths, eventually culminating in a boss battle. Again, I wasn't able to comprehend the meaning of each choice, but it usually resulted in a quick battle. These played out in a simplified form Phantasy Star Online 2's combat, with timed screen taps resulting in a succession of hits. Special attacks are activated with on-screen buttons, and other character classes can also be summoned for a quick assist. Occasionally, one of the three paths will lead you to treasure as well.

Honestly, it reminded me a bit of the Chao Adventure VMU mini-game from Sonic Adventure 2 on the Dreamcast, which allowed players to train their Chao when away from the console. The mobile version of Phantasy Star Online 2 will share data with the PC and Vita versions in some manner (though it won't be able to actually play alongside them). I wouldn't be surprised if it behaves more or less as Chao Adventure did, letting you earn some precious experience for your character while standing in line at the checkout counter (or sitting in class, or at the office, or while ignoring loved ones).

So, let's recap. Phantasy Star Online 2 seems to effectively recapture the simple charms of the original. It will be free-to-play on PC and Vita. Assuming Sega brings the portable versions stateside, the Vita version can keep me company on the couch when I'm away from the PC, while the mobile version will ensure that my character is never further away than my pocket. I like my job, folks. I love it, in fact ... but it might be in trouble.
In this article: android, ios, ipad, iphone, mobile, pc, phantasy-star-online-2, playstation, playstation-vita, sega, tgs-2012, vita
All products recommended by Engadget are selected by our editorial team, independent of our parent company. Some of our stories include affiliate links. If you buy something through one of these links, we may earn an affiliate commission.