BMW i3 sheds its skin, shows off carbon skeleton 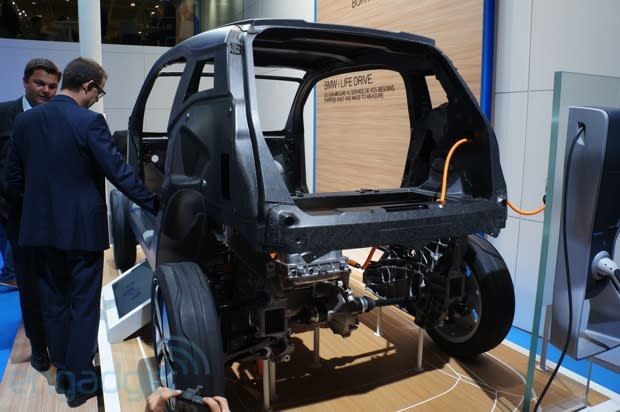 Want to know how the BMW i3 electric car can be so light (2,800 pounds) despite hauling around a massively heavy battery pack? A lot of it has to do with its carbon chassis. BMW uses something called CFRP (carbon fiber reinforced plastic) to create a material that is light, strong and, crucially, cheap enough to actually be used in production. The car is still on track for its 2013 release, where it will be sold out of posh i Stores like the one recently opened in London. In this article: aris auto show, ArisAutoShow, bmw, carbon, carbon fiber, CarbonFiber, cfrp, electric car, ElectricCar, ev, i3, minipost, mondial de lautomobile, mondial de lautomobile 2012, MondialDeLautomobile, MondialDeLautomobile2012, paris auto show 2012, ParisAutoShow, ParisAutoShow2012
All products recommended by Engadget are selected by our editorial team, independent of our parent company. Some of our stories include affiliate links. If you buy something through one of these links, we may earn an affiliate commission.
Share
Tweet
Share