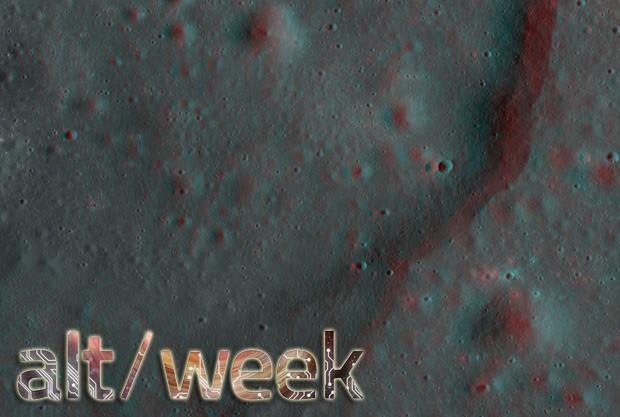 Dimensions, they're like buses. You wait for ages, and then three come along at once. And then another one right after that. While that might be about where the analogy ends, this week sees us off to the moon, where we then leap from the third, right into the fourth. Once there, we'll learn how we could eventually be controlled by lasers, before getting up close and personal with a 300 million-year old bug. Sound like some sort of psychedelic dream? Better than that, this is alt-week.

We've all seen the moon, like, a thousand times. Sometimes it's full, sometimes it's a waxing gibbous, sometimes it's even blue. Sadly, though, for most of us at least, the best we can hope for is a big bright flat-looking glimpse of the same old face we've come to know and love. New pictures, however, might change that. NASA's Lunar Reconnaissance Orbiter has been circling our moon since 2009 collecting high-resolution, yet decidedly two-dimensional, images as it goes. However, by using images of the same locations from different orbits and angles, scientists developed an automatic image processing system to stitch 'em together and create red-cyan 3D anaglyphs. The resulting images should allow most people to see our nearest neighbor like never before, with craters, volcanic flows and that face lava tubes all available (eventually) online in tri-dimensional glory. You just need to check that bottom drawer for those promotional Jaws specs.

3D is great an' all, but when it comes to dimensions, we say you can never have too many.
This is particularly true when it comes to clocks. Just three? That's so vanilla. So when we heard about a 4D one, that could outlast the universe, our interest was piqued. The concept is actually a space-time crystal, and it's not a new idea in and of itself. But, for the first time, brains at the U.S. Department of Energy (DOE)'s Lawrence Berkeley National Laboratory have put forward an experimental design using an electric-field ion trap and the repulsion of similarly-charged particles. Cutting through a lot of science, the result is a crystal that is discrete in both space and time. The 4D design would also be a many-body system, which would provide science with tools to better understand this complex area of physics. It's not all just lofty concepts though, with one of the group's co-authors noting that the work could "open doors to fundamentally new technologies and devices for variety of applications." There's no mention of whether it would have a stop-watch or not.

We'll dial down the dimensions a little for this next one. We all know that our ultimate and untimely demise will likely be at the hands of a laser-wielding robots. But, if you thought the pain would be over in one sharp blast, you could be wrong. A research team at the Howard Hughes Medical Institute genetically created a worm with neurons that emit light and respond to light. Using a laser to activate neurons one at a time, the researchers were able to make the worm move left, right, perform a loop, and trick it into thinking food was nearby. The scientists claim that the idea is to learn more about which neurons control what. But, we're stocking up on tin-foil all the same.

You know how they say cockroaches will survive a nuclear fallout? Well this guy obviously didn't, but still managed to live on, in its own way. These images are taken from CT scans of fossils, performed by the University of Manchester, England. A total of over 3,000 X-rays from a variety of positions were compiled, enabling researchers to create 3D models of the 300 million year-old 'roach ancestors. While these bugs might resemble one of our least favorite creepy-crawly cohabitants, the spiny critter is actually a never-before seen species. It's believed that it ultimately met its demise thanks to the rise of amphibious insectivores, who likely found these flightless creatures an easy target. We're not sure what's worse though, the idea of bequeathing the planet to the insect's descendants, or the thought of having to swallow one.