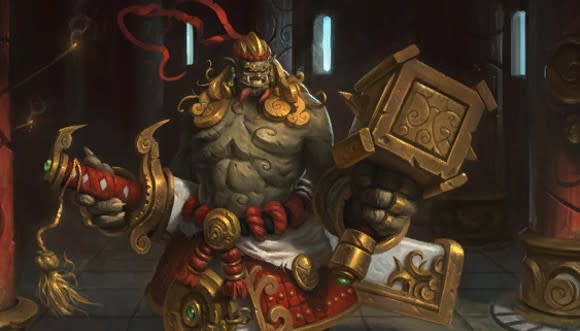 The World of Warcraft is an expansive universe. You're playing the game, you're fighting the bosses, you know the how -- but do you know the why? Each week, Matthew Rossi and Anne Stickney make sure you Know Your Lore by covering the history of the story behind World of Warcraft.
Warning - this entire post is going to be full of spoilers for Mists of Pandaria.

They are the usurped rulers of Pandaria. Even the name of the land has been stolen from them, as their slaves rose up and dragged down the most perfect empire ever seen under heaven. The mandate was tramped upon by illiterate savages, unskilled even in the arts of war, who used numbers and trickery to throw down the kingdom of those destined to rule all they surveyed. And using stolen grandeur, the slaves built a mock kingdom on the ruins of the true empire, and installed their own like children playing at adult matters.

But even after ten thousand years, the kings remember what they lost. Once, the Thunder King ruled. He saw the mantid, and drew from them inspiration. He saw the mogu, and brought to them unity through fear, and strength through unity. The Thunder King Lei Shen stretched out his hand and inspired his people to build a wonder, and the Serpent's Spine rose up.

Such is the will of the Mogu. This land belonged to the Thunder King and his people once. And it will again. You will kneel to the true kings as they reclaim the mandate of destiny stolen from them by unworthy hands, or you will die. And when you die, your death will only be the beginning of your sorrow, for flesh is their plaything, and souls their tools.

So who are the mogu?

The mogu story sounds familiar if you've heard of the kaldorei, or night elves. A race of huge, brutish entities, the mogu stumbled upon the magical waters of the Vale of Eternal Blossoms and were changed forever. They grew in size, strength and also became far, far more intelligent, capable of feats of magic unlike anything seen before. So altered, they began their rise to dominance over the area today known as Pandaria, at that time still a part of the great continent of Kalimdor well before the Sundering of the original Well of Eternity.

Now, we're left with various questions. Are the waters of the Vale of Eternal Blossoms related to those of the Well of Eternity? What were the mogu before they became advanced by the waters? Do any of the precursor people who were so changed by the waters still exist? How long did the mogu rule before the pandaren uprising, and how close to the Sundering was that uprising, exactly? Why do the mogu seem to have an alliance of sorts with the ancient Zandalari trolls? We do know that the Zandalari alliance with the mogu was strong enough that the trolls assisted the mogu during the pandaren revolt, and in so doing were driven out of the lands the pandaren claimed when they built their own empire. Still, Zandalari trolls remained allies to the mogu even to the present day.

You will know them by their works

We know that mogu warlords, such as the first mogu Emperor Lei Shen, ruled for untold thousands of years. Their works dot the continent, vast and enduring such as the titanic statues of mogu with crossed weapons that dominate the Vale of Eternal Blossoms. Lei Shen's rise to power was littered with the corpses of his enemies, and apparently began with his discovery of some sort of artifact, perhaps of Titanic origins. (This would dovetail nicely with the idea that the waters of the Vale of Eternal Blessings 'evolved' the mogu into their current state.) Whatever this device or artifact was, it may have been involved in the Titans' destruction of Y'Shaarj, the god of the mantid. It is whispered that Lei Shen had the Mogu'shan Vaults constructed to hide this great secret, the power that made him ruler of all mogu.

Lei Shen is known to have taken the inspiration for the first empire of the mogu from observation of the nearby mantid people. Being as intelligent as he was powerful, Lei Shen used his people's distrust and suspicion of the Mantid and their dread master to good effect, marshaling their fears to inspire the creation of a vast wall that sealed the mantid away from mogu lands. It was this construction project, one of the greatest ever undertaken by mortals, that was the foundation upon which the empire Lei Shen left to his descendents was modeled upon. When he died, Lei Shen's helmet was taken to the Guo-Lai Halls while his body laid to rest in the Tomb of Conquerors atop Kun-Lai Summit, because of the unique mogu approach to life and death, flesh and spirit.

Death doesn't matter when life is your tool
To the mogu, death is seen as trivial, and the bodies of the dead are raw material that can be altered and restored through mogu magics. The mogu did not have magical professions we recognize today - no mages or warlocks or priests, for example - but instead their magical power, gained from their exposure to the waters of the Vale, gave them insight into how the flesh and the spirit coexist. The mogu could alter flesh, warp its shape, even transform it from flesh to unliving stone.

If you just said "Hey, wait a minute, it's like they could do the exact opposite of the Curse of Flesh" then you're exactly right. Whether it came from their study of Titan artifacts or their expose to the poten magic of the Vale's waters, the mogu could turn flesh to stone, and back again, or take unliving stone and infuse it with life and spirit, making it live in a manner far superior to the crude golems we know of in other parts of Azeroth. To the mogu, the dead were simply dormant, and could be brought back to life in various ways. Both the saurok and grummle were created by mogu fleshcrafting, and the stoneborn servants of the mogu were made by infusing unliving jade and other materials with life. Mogu spirits can be infused into unliving clay and reborn as terracotta statues as well.


How the mogu fell, how the pandaren rose

Despite their physical and mental gifts, their terrible magic, and their vast empire, the mogu grew complacent after Lei Shen's death. Cruel and petty kings like Emperor Dojan II would squander power oppressing their own subjects, fighting rebellious saurok driven against their creators by their rapacity and greed, and the mogu way of rulership based entirely on personal might and repression made them few allies aside from the Zandalari. After the saurok rebelled, the pandaren were left as the main slave people of the empire, and they greatly outnumbered their putative masters. The mogu responded to this by decreeing that no pandaren could learn to use or bear arms and then fell back into their games of assassination and dominance, each petty warlord and trivial king seeing himself as master of all he surveyed.

The mogu were blind to the qualities of those under their rule. They saw the Serpent's Spine as the solution to the mantid problem, the saurok who hadn't fled to Krasarang had their souls torn out of their bodies for their disobedience, and the pandaren were incapable of fighting them without weapons. The saurok had been created as warriors, trained with weapons, and they had failed to do more than assassinate an emperor and plunder a few tombs. What could the unarmed, untrained, agreeably pliant pandaren do against the relentless might of the mogu?

This fatal undervaluing of their subjects led to the end of the Mogu'shan Empire. The pandaren were everything the mogu were not - patient, compassionate, socially oriented, and capable of cooperating among each other. The mogu waged war on each other as incessantly as they oppressed everyone else. It never occured to them that the pandaren could learn to fight without weapons, using their bodies as their means of warfare. They didn't expect pandaren courage, or pandaren armies working together to defy their masters. And so, the pandaren drove the mogu inexorably from their seats of power until only a few lost fastnesses were left to them, and the land entire was ruled by the unarmed slaves that could not possibly pose a threat to the mighty twisters of flesh, engineers of souls.

The king rises in thunder

Yet not all is lost for the mogu. Xin the Weaponmaster, the current king of the mogu (who have bided their time over the thousands upon thousands of years since their defeat) has begun the process of uniting his people. Yet it is not Xin who is the most dangerous force galvanizing the mogu. Zandalari agents have recovered the body of Lei Shen the Thunder King, and it's whispered that the first emperor of the mogu walks the world again. If so, the mogu finally have a leader capable of bringing unity through fear again, the one who built the Serpent's Spine, whose will left the monuments that dot the face of modern Pandaria.

The mogu rise. Can they be stopped, or will the Mogu'shan Empire conquer the usurpers and restore the mandate of destiny?

While you don't need to have played the previous Warcraft games to enjoy World of Warcraft, a little history goes a long way toward making the game a lot more fun. Dig into even more of the lore and history behind the World of Warcraft in WoW Insider's Guide to Warcraft Lore.
In this article: featured, guide, guide-to-lore, lore, lore-guide, Mogu, mogushan, role-play, role-playing-guide, rp-guide, world-of-warcraft-lore, wow-guide, wow-lore, wow-role-playing, wow-role-playing-guide, wow-rp, wow-rp-guide, wow-rping, Zandarlai
All products recommended by Engadget are selected by our editorial team, independent of our parent company. Some of our stories include affiliate links. If you buy something through one of these links, we may earn an affiliate commission.