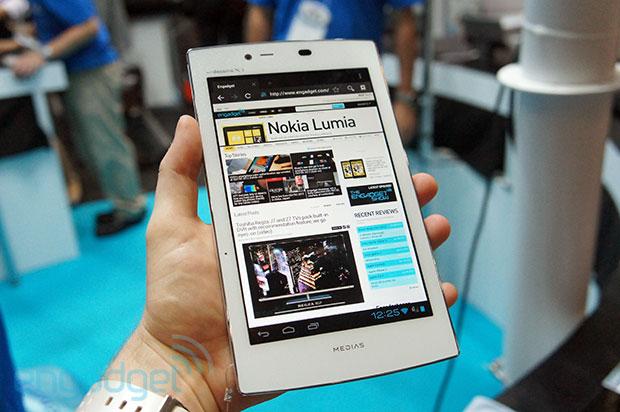 Folded in between DoCoMo R&D prototypes and One Piece-themed smartphones unlikely to make it across the Pacific, NEC's new Android tablet caught our eye. The 7-inch NEC Medias Tab UL is one very svelte slab. Measuring in at just 7.9mm (0.3 inches) thick and weighing a mere 250g (0.55 lbs), the tablet still manages to house a 3,100mAh battery, and a Snapdragon MSM8960 1.5GHz dual-core processor. If you'd compare it to the Nexus 7, Google's own effort look a little weighty and thick against this white-finish tablet. Performance from the dual-core chip is also suitably impressive, despite the curious DoCoMo-decked Android skin coating the Ice Cream Sandwich OS.

In true Japanese style, there's a TV aerial embedded within the side and while it won't broadcast the crisp high-definition delights of NOTTV, there's plenty of terrestrial viewing available -- if you stay in the Land of the Rising Sun. We were pleasantly surprised with its crisp WXGA screen, which looks to be TFT. The 1,280 x 800 resolution display meant videos and websites looked sharp, while there was barely any color degradation at wider angles. On DoCoMO's network, users can expect to see download speeds up to 75Mbs, and upload speeds hitting up to 25Mbps. The tablet is now on sale across Japan, but there's still no word yet on it launching elsewhere.

19
In this article: 1-seg, 7-inch, Android, Android 4.0, Android4.0, CEATEC, CEATEC 2012, Ceatec2012, DoCoMo, dual-core, Google, Japan, Medias, NEC, NTT DoCoMo, NttDocomo, tablet, TV tuner, TvTuner, video, WXGA
All products recommended by Engadget are selected by our editorial team, independent of our parent company. Some of our stories include affiliate links. If you buy something through one of these links, we may earn an affiliate commission.
Share
Tweet
Share