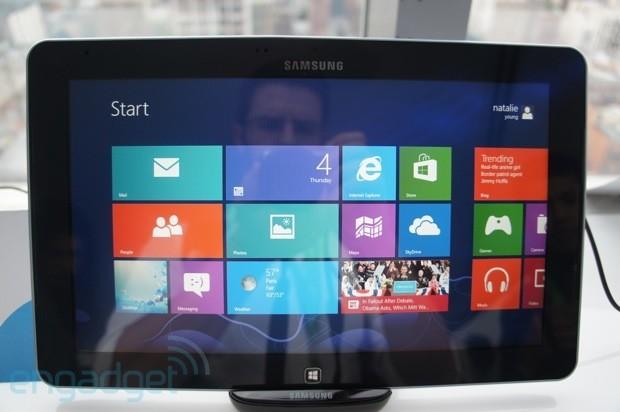 We knew we were going to get to spy some sleek new devices from AT&T today, but the company sprung a bit of a surprise on us at the last moment by announcing that it would also have a few Windows 8 tabs on hand running on its "blazingly fast" LTE network. The Samsung ATIV SmartPC, which has also gone under the name Series 5 Slate in a few other circles. The 1.5GHz Clover Trail chip inside hummed along in our brief hands on, chewing through the gorgeous don't-call-it-metro UI with relative ease and loading a few apps and webpages with nary a pause. With 64GB of storage on board there should be plenty of room for basic productivity apps and a view movies. Though, if you're a serious MP3 hoarder, we wouldn't expect to carry your whole music collection with you.

Not surprisingly, the 11.6-inch display makes for a rather hefty device. In fact, even during our short hands-on we were happy to have a stand to rest the slate in. It's certainly not unbearable, but this isn't something you're going to slip into a bag and pull out on the subway to read with. That said, the trade off is an absolutely stunning display with stellar viewing angles and superb brightness and saturation. The 1,366 x 768 HD PLS panel is, in a word, gorgeous. The device itself is pretty slick too. There are some brushed metal accents, but the majority of the device is slightly glossy plastic that, amazingly, doesn't immediately make us feel like we're manhandling a toy. There was a slight give, but we're willing to forgive it on an otherwise premium feeling tablet.

Along the top is an array of ports and buttons, including a micro-SIM slot for connecting to AT&T's LTE network. (Which would go a long way towards explaining why it was being showcased at the event.) That's also where the volume rocker, power button, headphone jack, microSD slot and MicroUSB port are all stashed, making for a rather crowded top edge. There's also a 2MP front facing camera for gettin' your video chat on and a rear facing cam, though we don't imagine anyone will be taking too many photos with this. For more, check out the video below.

In this article: ativ, ativ smartpc, AtivSmartpc, att, lte, samsung, samsung ativ, samsung ativ smartpc, SamsungAtiv, SamsungAtivSmartpc, slate, tablet, windows 8, Windows8
All products recommended by Engadget are selected by our editorial team, independent of our parent company. Some of our stories include affiliate links. If you buy something through one of these links, we may earn an affiliate commission.
Share
Tweet
Share