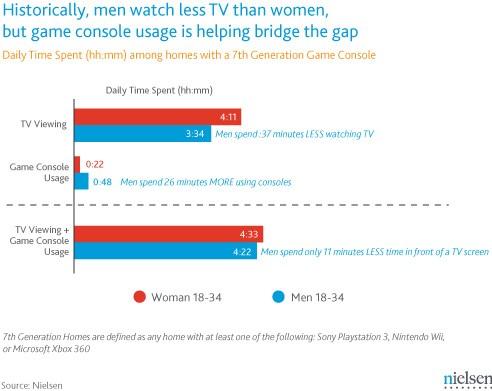 We're not sure if we should always cheer figures that reflect sedentary behavior. Still, chalk one up for greater (if superficial) gender equality. Nielsen finds that, as of this past March, men who owned a modern game console like the PlayStation 3, Xbox 360 or Wii were using their TVs almost as much as women: while males in the broader population typically spend 37 fewer minutes in front of the big screen every day than females, that gap shrank to a negligible 11 minutes when console use came into play. Unfortunately, the agency doesn't say just what's getting men to tune in for that much longer. Gaming is the most likely culprit, but a raft of streaming video options could have some of those refined couch potatoes watching Hulu or Netflix instead of playing one more round of Gears of War. If consoles have people of all genders spending more time together, we're in favor of it; given that men still spend over twice as much time on consoles as women, though, it's clear there's still a bridge to cross if we want more of a balance in the kinds of TV activity we enjoy.