Latest in Association for computing machinery 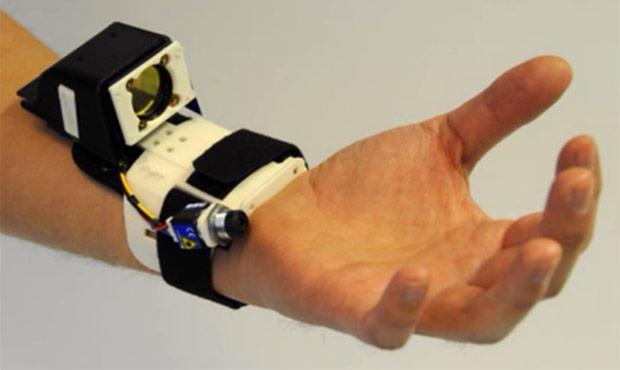 A team led by researchers at Microsoft's UK-based R&D lab has crafted a system that tracks the full 3D pose of a user's hand without the need for a pesky glove. Dubbed Digits, the Kinect-inspired rig latches onto a user's wrist and utilizes a diffuse infrared light, IR laser, camera and inertial measurement unit to track fingertips and just five key points of a hand. Leveraging a pair of mathematical models developed in-house after studying the mechanics of the human hand, the group uses the captured data to extrapolate the position of a user's paw. The team envisions the solution as a supplement to touch-based interfaces, a method for eyes-free control of mobile devices and as a gaming controller that could work in conjunction with Kinect or similar systems. In its current state, the device is composed of off-the-shelf parts and needs to be tethered to a laptop, but the ultimate goal is to create a mobile, self contained unit the size of a wrist watch. Hit the break to catch a video of the setup in action or tap the second source link below for more details in the group's academic paper.