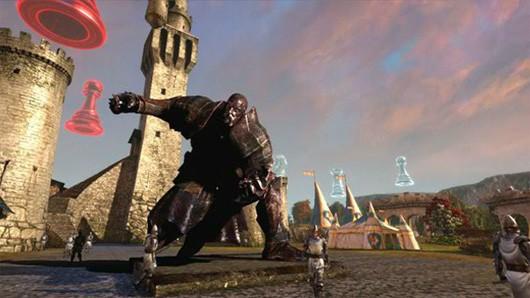 This week at GDC Online, Gamigo showed off the progress in not one but two of its upcoming titles. Otherland, based on the novels by Tad Williams, has begun to pick up pace lately, with a series of closed beta events in Europe. Meanwhile, Grimlands has also made quite a bit of progress and is working out the finer details as it nears release.

Massively sat down with Gamigo CEO Patrick Streppel to get a firsthand look at both games. Read on for highlights from both the Otherland and Grimlands demos!

First off, Streppel showed off the tutorial and beginning gameplay of Otherland. The character select screen offers several different looks and customizations, although if you've been following the game's progress, you'll know that players can change their physical appearance at any time, including face, hair, body type, and even gender.

There are four classes available at launch, as well. The Energizer is a healer type that relies on ranged combat combined with healing abilities, while the Warrior is a melee class that wields a sword and has special AE damage abilities. The Marksman is a ranged DPS that has a few tricks, like shields, and has a feel similar to the SWTOR Smuggler. Meanwhile, the Assassin combines stealth and melee attacks to pack a punch, similar to a rogue. Players will be able to see and try out all four classes in the tutorial and then select one at the end. You can switch classes, but it comes with a price, so ideally you want to focus on one choice. At launch, the game will have a level cap of 64.

Combat is a combination of mouse button attacks and special abilities that are on a hotbar and can be key-mapped. It's not quite TERA; it's more aligned with Guild Wars 2, although Streppel stressed that it's still a work in progress. The Warrior, for example, is a class that he feels has been too slow in combat, so his team is working on speeding up the pace and working on class balance overall.

The game will launch with three worlds: Lambda Mall, a sci-fi-themed city; Eight Squared, a fantasy-themed setting; and Aerodromia, an Asian setting within which are areas that reflect the Chinese Five elements. Post-launch, players will be able to visit Mars and another world to be revealed later. Otherland starts off where the novels finish, but for those not familiar with the novels, fear not; the tutorial gives the player a background of the storyline. In the tutorial that we saw at the con, the visuals were impressive, and while the voice-overs were clearly still in progress, Streppel pointed out that one NPC during the boss fight was actually voiced by Tad Williams himself!

Next up for beta events is a focus on PvP. There are several areas flagged for PvP, and players will be able to battle it out. The dark side of Lambda Mall -- the Hacker Zone -- will be a PvP area, for example. Meanwhile, clans can capture and control one of several bars within Lambda Mall, and clans get a commission of the business from players who visit. Clans can also benefit from special buffs from drinks at the bar. In addition, clans can create their own instances, called Clan Lands. They're essentially the world in the site of Eight Squared, although it starts off small and requires clans to grow it. Clans can attack other Clan Lands, though, which makes for some challenging gameplay.

When asked about the cash shop, Streppel said that Gamigo adopted a "time vs. money" philosophy, so there are vanity items available, but those items are also available as drops in the game world. There are also items that will give players a leg up and help reduce the time needed to develop their characters.

As for the timetable, Gamigo plans two more closed beta events for Europe and aims for a release sometime early next year. If you're in Europe and looking to check out the game, keep your eyes peeled for another closed event in November.

Meanwhile, Grimlands has been coming along nicely, having been in development for about five years by Drago Entertainment. The setting is post-apocalyptic, as a nuclear disaster has been triggered in the midwest United States from a series of devastating earthquakes. It's a combination of RPG and FPS combat in a seamless, multiplayer world. All items in the world are essentially player-crafted, which falls in line with the central storyline.

Combat is skill-based, and there are a range of skills to work on, from basic weapon skills to more refined skills like the ability to move without making a lot of noise. Skills do degrade over time, so just as in the real world, if you fail to practice, you will get rusty. The actual combat is taken from the pages of the FPS genre, so players will need to focus their shots on certain target areas, like the head, body, arms, etc.

During our hands-on, we walked through the tutorial first off, and as our character moved to certain points, occasional pop-up browser videos instructed us on the basic game mechanics, which was a nice touch. Another nice UI feature is the color-coded quest log, which ensures that your quest listing will be the same color as the directional arrow that marks your way. That feature made managing active quests so much easier.

There are some nice touches to the game, like the LFG tool that lets players select what they want to do. You can choose to group for a specific instance or queue for a random solo, easy, normal, or hard instance. In this sort of skill-based system, the nice thing is that even a brand-new player can participate alongside vets.

Crafting is a fairly deep system; practically everything in the game can be crafted. Players can harvest resources from nodes in the world, loot useful crafting drops from killing things, and use them to make things from blueprints. When a player makes an item, he has a lot of control over the stats and uniqueness of an item as he can spend his crafting points any way he likes. And as a player skills up, he'll have a larger pool of points to spend. Streppel added that players can be crafters without even taking part in combat, since the auction house and player trading lets crafters conduct their trade without ever lifting a sword.

There are two forms of transportation: cars and helicopters. Helicopters are a safe way to travel and are pretty much instant ports to various locations on the map. All you need is a ticket to trigger a flare and summon a 'copter. Cars are much more interesting because you can buy a car and then customize it to your liking. Cars can hold as many as four players, so one character can drive and the others can serve as gunners, which is particularly helpful when taking on baddies and rival clans.

The world has consensual PvP, but there are lots of incentives to flag yourself for PvP, particularly if you're part of a clan. Cities in Grimlands can be controlled by clans, giving those clans special perks and the ability to determine who can and can't use that city. In addition, there are post-launch plans for player towns. The player-controlled towns are currently in ruins and are overrun by NPCs. Clans that are ready and willing can take back the five existing towns and can rebuild them and control them to acquire unique benefits. Clans can even form alliances to work together to take a town. The clan window can also allow you to declare war on other clans, although that takes resources and money. During the demo, Streppel showed off Tower Town, which was a town built into the top of a power line tower. Everything you can see on the horizon, he told us, you can reach.

Grimlands has been in closed beta, but Streppel said that Gamigo has plans for a launch in early 2013. The studio wants to give the game the right amount of time to get things right, and based on the demo, I'd say it's getting very close.