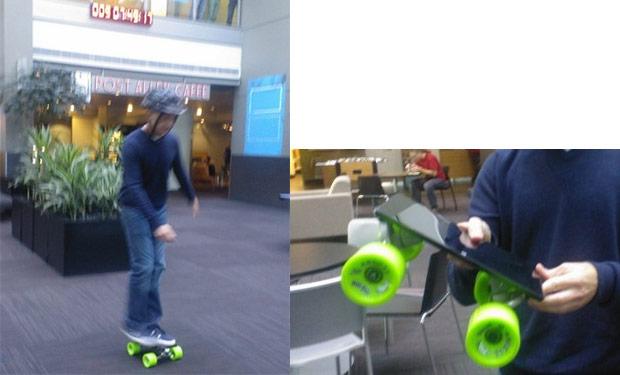 Gorilla Glass 2 and a chassis forged from magnesium lend Microsoft's Surface slates some durability, but the firm's decided to prove just how tough its tablets are by turning one into a skateboard. The wheeled slice of Windows 8 is said to have been rolled out during a tour of Redmond's Surface skunkworks, but Windows chief Steven Sinofksy couldn't resist hopping on the board today and tweeting a pair of photos. You can pre-order your deck now, though something tells us this mod isn't covered under Ballmer and Co.'s warranty.

In this article: microsoft, microsoft surface, Microsoft surface tablet, Microsoft Windows, Microsoft Windows 8, MicrosoftSurface, MicrosoftSurfaceTablet, MicrosoftWindows, MicrosoftWindows8, skateboard, skateboarding, skateboards, slate, slates, surface, surface slate, surface tablet, SurfaceSlate, SurfaceTablet, tablet, tablets, Windows, Windows 8, windows 8 rt, Windows8, Windows8Rt
All products recommended by Engadget are selected by our editorial team, independent of our parent company. Some of our stories include affiliate links. If you buy something through one of these links, we may earn an affiliate commission.