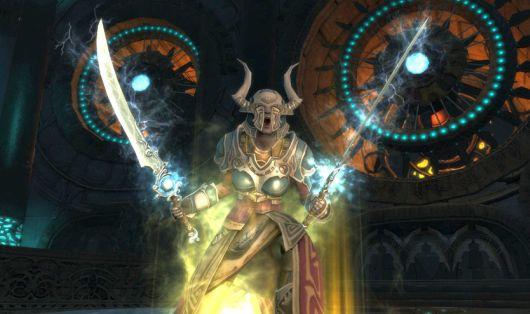 I still can't wrap my head around just how many metric tons of content are coming with RIFT: Storm Legion. It's an expansion that looks to put other expansions to shame by sheer size alone. Epeen competitions notwithstanding, any one of these major features would usually be good enough for a full expansion elsewhere.

Take the new souls, for example. Storm Legion is adding four of them, one for each archetype. That's not just four additional classes but a hefty amount of additional combinations, since RIFT builds allow for three souls at a time. So each archetype is going from 56 unique soul combinations to a whopping 84.

I can only imagine how much of a headache 336 different soul combinations are to balance, but fortunately I don't have to worry about it from my end. Instead, I want to take a look at the revealed new souls and speculate as to how they'll fit in with the game come next month.

Battle mage, baby! The first Storm Legion soul revealed, the Harbinger looks so dang sweet that it pains me not to be working on a Mage right now. It's not the tank that some Mages were hoping for, although I think that Trion Worlds was smart not to give in to that. Instead, we've ended up with a melee class that creates its own magical weapons, uses all sorts of tricks to not die in combat, and can reduce cast times.

While the magical weapons are certainly the most flashy element of this soul, I think it's the last feature that's the most intriguing. I hate cast times and am always gravitating toward instant-cast spells or abilities in any build I use. Since so many of the Mage's souls have plenty of cast times (being a spellcaster, of course), mixing in the Harbinger to boost these other builds could inject so much life into them. Pyros are said to work very well with the spell cast reducing mechanic.

There's some synergy here with Chloros (the Harbinger has some element of healing to them) and Stormcallers (both share air-based magic).

My main concern is that the Harbinger will be so popular that we'll see a flood of Mages barging into dungeons, raids, and expert rifts wanting to go toe-to-toe with the big bad guys and then dying in droves. Tricks are all well and good, but Mages are still fragile flowers that can go down in a hurry if they're not careful.

While the Mage is getting a melee soul, the Warrior is ironically gaining a long-range spellcasting soul. The Tempest sounds to be a bit like Iron Man: a heavy plate-wearing fighter who launches bolts of energy from a distance. But like the Harbinger, the Tempest is centered around air damage (in this case, lightning attacks). It also has access to illusions to help out its cause (Iron Man dabbling in holograms? I'll shut up now.).

I'll admit that I know the least about Warriors out of all of the archetypes, as they've just never interested me. This particular soul could change my mind, however. It's got that visual flare that would make combat awesome, and being able to mow down enemies at range would be just terrific for non-tanking Warriors in groups.

Another interesting commonality with the Harbinger is that both souls have limited-use (10 second) stealth skills. Stealth is one of those options that you don't quite appreciate until you have it, and then it becomes indispensable as a tool.

Trion recommends that the Tempest mix in a good melee soul to balance its weakness as a ranged damage-dealer. That means that it'll probably go well with almost anything, although it depends whether you want to do most of your damage at range or just use it to pull. I've heard that the new Beastmaster upgrades will synergize well with it, providing nice group and raid utility.

Unless the Cleric reveal proves to be irresistible, Trion had me with the Rogue at "flamethrowers." It's like the team knew everything I liked about ranged classes and threw it all into an attractive package: turrets, healing, ranged DPS, support, and oh yeah, flamethrowers.

Everyone is talking about how the Tactician is a perfect match for the new and improved Bard, which has me interested as well. I love the Bard soul (and use it primarily while grouping), and the notion of making it a possible main healer or a super-buffing support build warms the cockles of my heart.

A big plus to the soul is how mobile it is. From the sound of it, we're going to be running all over the place casting our magical flamethrower, dropping cores (turrets), and activating "remotes" (group buffs) and "engines" (self buffs).

Apart from Bards, I'm not sure how I'm going to mix-and-match this soul, at least not until I get my hands on it. The Saboteur seems like a natural fit, since it's all about tossing out devices while on the move, but those buff abilities would go great with the Riftstalker as well.

The final soul reveal hasn't officially happened yet, although we know that the Cleric's new soul will be called the Defiler. I think we can deduce a few things based on the name and the other revealed souls, however.

The first is that it will be based on air magic, which seems to be the motif with the expansion. "Defiler" as a word shouts "debuffer!" to me, so perhaps we're going to get a soul that will help to strip enemy defenses away and leave them as weak as a kitten.

But the other thing I'm thinking about is where the Clerics need boosting. Each of the other new souls help to bolster their respective archetype's roster with something that's either new or somewhat rare in that calling. For Clerics, support is very rare -- we just have one soul that's a half-support, half-tanking role. If we could gain access to a pure support soul, that would be great. I also wouldn't complain about a pure tanking one, either.

I'd love to hear from you all: What do you think of these new souls, and what are you going to be playing come Storm Legion?

Whether they're keeping the vigil or defying the gods, Karen Bryan and Justin Olivetti save Telara on a weekly basis. Covering all aspects of life in RIFT, from solo play to guild raids, their column is dedicated to backhanding multidimensional tears so hard that they go crying to their mommas. Email Karen and Justin for questions, comments, and adulation.
In this article: class, classes, conquest, defiler, enter-at-your-own-rift, expansion, fantasy, featured, harbinger, opinion, pvp, rift, rift-lite, rift-planes-of-telara, rvr, storm-legion, tactician, telara, tempest, three-faction-pvp, three-way-pvp, trion, trion-worlds
All products recommended by Engadget are selected by our editorial team, independent of our parent company. Some of our stories include affiliate links. If you buy something through one of these links, we may earn an affiliate commission.