CineXPlayerHD plays just about any video format on your iPad

Is CineXPlayer for iPad struggling to deliver on its Xvid-playing promise? 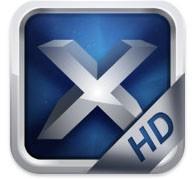 CineXPlayerHD is a jack-of-all-trades iPad app (US$3.99) that can play just about any video format you throw at it. This latest version, 3.0, adds playback of the popular MKV format on the iPad 2 and above.

The app supports 720P HD playback, and also Dolby Digital Plus with support for 5.1 channels, and Dolby Mobile for surround on Dolby-equipped headphones. Within the app there's a way to catalog your movie collection, and to create playlists.

Movies can be loaded through iTunes or they can be played back from a network drive via streaming. There is a built in web browser so you can navigate to your source files on your network. The app plays back AVI, MOV, M4V, 3GP and MP4 as well as Xvid.

There is also subtitle support with the ability to drag the text to different parts of the screen.

I don't have lots of different formats on hand, but the player did fine with some AVI files and some MOV files I created from DVDs. I was able to output the video to my Apple TV and everything looked fine with good sync between audio and video. The app also provides for some extra features as an in-app purchase. One for enhanced security, another to convert Xvid videos to 3D. Both plugs-ins are $0.99, but neither are required for most users.

CineXPlayer is a welcome addition if you are into video, and have files that the Apple supplied video player just won't play.

CineXPlayer requires an iPad running iOS 4.3 or later, and you will only get 720P playback on an iPad 2 or better. The app seems well worth the $3.99 price, and it should appeal to many who use their iPad for video playback. Check the gallery for some screen shots.

5
In this article: avi, CineXPlayerHD, iOS, iPad, M4V, MOV, movies, MP4, review, video, videostreaming
All products recommended by Engadget are selected by our editorial team, independent of our parent company. Some of our stories include affiliate links. If you buy something through one of these links, we may earn an affiliate commission.