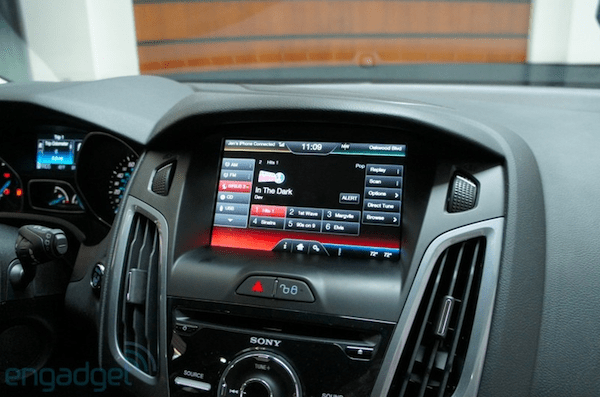 They grow up so fast, don't they? It was almost six years ago that we saw Ford SYNC step into the world, and the automaker has just handed the keys to the owner of the 5-millionth SYNC-capable vehicle. While we haven't been told what model had the distinction, the milestone represents another million SYNC cars, SUVs and trucks than we saw in May last year. The most striking aspect between then and now may just be the shift in focus (pun entirely intended) -- where we started off just happy to hook up our Zunes in a world of CD changers, we're only content today if we can control seemingly every mobile app known to humanity through a touchscreen. Ford might not want to look too fondly at its rear-view mirror, however, lest an abundance of technology-laden competition close in too quickly.

· Five years after launching SYNC® with Microsoft, Ford has delivered more than 5 million vehicles with the award-winning connectivity system

· SYNC's success based on open, flexible and agnostic Microsoft platform and vision for mobile connectivity being a growing consumer trend

SAN FRANCISCO, Nov. 5, 2012 – Five years ago, Ford Motor Company and Microsoft came together to launch the benchmark for in-vehicle connectivity systems with the introduction of SYNC. Today at the GigaOM Roadmap Conference, Ford CTO Paul Mascarenas and Microsoft Windows Embedded General Manager Kevin Dallas announced the 5-millionth vehicle equipped with SYNC has been sold and they shared their joint vision for continued leadership in development of the connected car.

"SYNC has helped us evolve as an automaker, to think and act more like a technology company, with a new level of openness and access that has forever changed how we look at our business and respond to our customers," said Paul Mascarenas, chief technical officer and vice president, Ford Research and Innovation. "Ultimately, SYNC embodies what Ford is all about: going further to transform innovative ideas into products that are affordable, attainable and valuable to millions of people."

When Ford and Microsoft first initiated the collaboration in 2005, the engineering teams recognized that mobile electronics were quickly becoming an increasingly important part of people's lives as cell phones and digital media players. Considering how quickly mobile device usage had grown in just the previous few years, the development team decided a new development approach was needed going forward.

Click here to view a video about the origins of SYNC: http://youtu.be/CGP9j9iYzww

"Thanks to our partner Microsoft and their expertise, we have turned the car into a platform with extensive opportunities for developers to work with us to continue to add value through new features delivered at the speed consumers now expect," continued Mascarenas. "With more than 1 billion smartphones now in service around the world, we expect mobile connectivity will continue to be the foundational element of our strategy going forward."

"We've worked with Ford on SYNC right from the start," said Kevin Dallas, general manager of Windows Embedded, Microsoft Corp. "Taking a platform approach enabled us to move quickly and deliver an innovative solution unlike any in the industry while providing us the flexibility to continue to deliver new features and improvements to Ford customers."

While cars and trucks typically stay on the road for more than 10 years on average, people often replace their consumer electronics every couple of years to keep pace with the latest advances in technology.

The SYNC development team created an architecture based on the Windows Embedded Automotive platform that took advantage of open protocols like USB and Bluetooth® to enable virtually any device to be connected for media playback and communications. That decision turned out to be more prescient than anyone on the team could have imagined.

When SYNC was first announced on Jan. 7, 2007 at the International CES, the presentation featured the iPod, Motorola RAZR flip-phone and Palm TREO smartphone. Just two days later, Apple began a mobile phone revolution and the beginning of the app economy with the announcement of the original iPhone. When customers began driving the first car available with SYNC, the 2008 Focus, in fall of that year, most were using SYNC to make hands-free calls using their feature phones and play back music from iPods with simple voice commands powered by Nuance voice recognition technology.

"Now, it's clear that building an open, upgradable connectivity platform has been key to the success of SYNC because it has allowed us to stay relevant to the consumer," said Mascarenas. "With SYNC, Ford vehicles are no longer stuck with the technology built in at the factory, they can keep pace with the latest consumer trends through simple software updates."

With 5 million SYNC-equipped vehicles on the road and the system just beginning to launch in Europe and Asia, Ford and Microsoft, along with Nuance, are always working on new enhancements that will keep customers on the leading edge of in-car technology. Ford was ranked first in ABI Research's OEM connected automotive infotainment Competitive Assessment, with high ratings for implementation, innovation, and price.

"At Microsoft, we're now focused on how data and connectivity can turn devices into intelligent systems that enable insight-driven action," said Dallas. "In the vehicle, this means the ability to connect to more data from more sources and use it to help the driver. Together with Ford, we're helping them turn the connected vehicle into an intelligent vehicle."

Cloud connectivity, on-board sensors and data access are key components for creating this kind of intelligent vehicle experience. Other advances, such as natural language processing and machine learning, could help SYNC provide a more natural interaction between car and driver, enabling a driving experience that's more personalized, convenient and safe.

"The car is a rich source of real-time data and when combined with the processing power available in the cloud, it could become the smartest device you will ever own," adds Mascarenas.

In this article: ford, ford sync, FordSync, infotainment, microsoft, minipost, myford touch, MyfordTouch, sync, transportation
All products recommended by Engadget are selected by our editorial team, independent of our parent company. Some of our stories include affiliate links. If you buy something through one of these links, we may earn an affiliate commission.