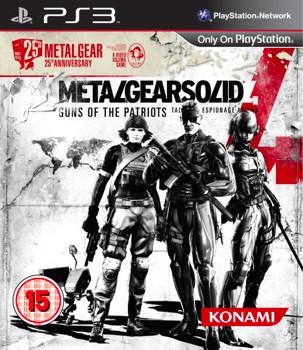 A '25th Anniversary Edition' of Metal Gear Solid 4 has appeared on European retailers Zavvi and ShopTo. Both retailers give the re-release a November 30 release date, but they differ wildly on their prices. ShopTo has pre-orders for £15.85, discounted from an apparent MSRP of £19.99, while Zavvi asks £37.45.

We didn't even realize it was the 25th anniversary of Metal Gear Solid 4! Oh ... right. It's a re-release honoring the 25th anniversary of Metal Gear. Neither retailer detailed the additions, but MGS4 has since been updated with Trophies and full installation, which would naturally be on the new disc.
In this article: europe, konami, Metal-Gear-Solid-4-Guns-of-the-Patriots, MGS-4, MGS4, MGS4-Guns-of-the-Patriots, playstation, ps3, shopto, zavvi
All products recommended by Engadget are selected by our editorial team, independent of our parent company. Some of our stories include affiliate links. If you buy something through one of these links, we may earn an affiliate commission.