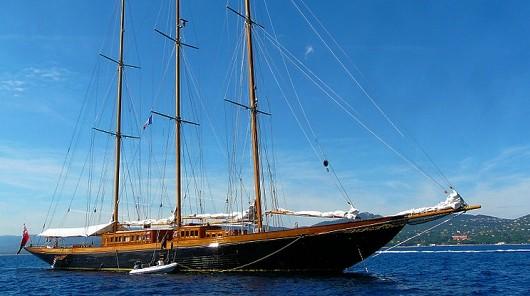 So here we are, lounging on the deck of our yacht, sipping cool drinks out of fake coconuts while lifeguard cosplayers -- they're cosplayers, right guys? -- gently wave palm leaves at us. Later, of course, we'll dock somewhere and whip out our laptops and dash off some posts about video games before we get back to enjoying the titillating payoffs we earn as members of the gaming journalism front lines.

Hopefully you've guessed that Massively doesn't have a yacht. We don't even have an office. The Massively yacht is a mythical destination, a running joke that's only mildly funny and then only to the people who work here, since only we know what we're paid, how insanely strict the Joystiq network is about accepting items on the spectrum between gifts and bribes, and how that strictness both hurts and helps us and you.

That's something worth talking about in light of the Eurogamer debacle.

A few weeks ago, Eurogamer published an article criticizing the games journalism industry for being too cozy with the games PR industry. As evidence, the author put forth a photograph of a games journalist clearly advertising a specific brand of soda pop and snacks, and then he linked to several games journalists pimping their social media accounts to win free gaming consoles. (The latter was apparently edited after the fact and reproduced on other blogs in the wake of the original writer's departure from Eurogamer.)

There's really nowhere Eurogamer or any other site can stand while throwing stones at rival games journalists without shattering its own glass house. The potential for corruption affects every imaginable tier of reporting, from White House correspondents to fashion critics. This is why most serious publications maintain a strict ethics policy that sets the standard for what writers can and cannot accept from sources and contacts and marketing and PR.

The bummer is that stricter ethics means thinner content.

For example, Massively's writers are not permitted to accept travel money, flight money, hotel money, or extravagant meals and gifts from game studios. This is a formal policy that extends across the entire Joystiq network. Any time you see us reporting from a studio-hosted event, you can rest assured that either the writer paid his own way or we sent him out of our own budget. Once he's there, he's allowed to accept basic hospitality, like a slice of pizza so he doesn't starve to death, but he can't submit to flamboyant wining and dining, and he can't bring home swag worth more than $20 unless we then give it away on the site.

I have personally found that at many studio events in San Francisco, I am the only local present, annoying the heck out of the studio's press handlers because I just don't fit in the media template they've arranged for me. The other MMO attendees have usually accepted travel, room, and board, the cost of which stacks up a lot higher than some gaming console lotteried over Twitter. In a way, I don't blame them. Most of them are surely paid less than Massively's writers, if they're paid at all, and these little trips might be among the few perks they get. Does it corrupt them, make them more likely to report positively on the game? I don't know. But I know that it could, and I know it could look that way. Massively avoids both the appearance of impropriety and the related temptations by just paying our own way.

The downside is that we have to skip a lot of events if we have no one able to pay to go, which means we lose out on cool content and you lose out on hearing our perspective, which I'd like to think is unique in the MMOspace. Turning down free trips to play FFXIV in Japan or tour the set of Defiance hurts us in the gut, believe me, but that's the cost of ethics.

Massively is also lucky in that we don't control advertising on the site. AOL does, and I can say that in my entire tenure as a lead editor here, I have never once been asked to alter our content to accommodate advertising interests. Never. The day I was hired, I was told to install an ad blocker so that my writing would never be compromised by whoever was paying AOL to run softcore gaming pr0n or ads for kosher hot dogs (I still don't understand that one) behind our meticulous prose.

Contests and giveaways fall into greyer territory. Last summer, we put a halt to beta key giveaways partly because they felt like shilling for games, like promoting games instead of critiquing them. I know we lose out on hits (and some fun too!) by not jumping on the beta key handout bandwagon, but I feel a lot less like a drunken Mardi Gras coed holding up my t-shirt and clamoring for beads when we stick to writing about games and leave the hoopla to other sites.

Press accounts can seem dodgy too. A month ago, a few Mortal Online players went ballistic at the idea that one of our writers might accept a loaded press account to explore a game. But if we want to see and write about endgame in one of the many non-AAA titles launching every month, a press account is invaluable and is no different from a "review copy" of a game. The important thing is that afterward, we go back to our personal, unboosted accounts for actually playing.

I've talked before about the pointlessness of intentionally antagonizing game developers and PR, and the Eurogamer spectacle puts the debate into fresh perspective. Games journalists aren't at war with games PR, but we shouldn't be allies, either. And no, a few tweets to win a PS3 or a dude pimping a can of pop is not what is corrupting the industry. It's much deeper than that. Networks have to change from within to care more about ethics than hits. They'll have to give up some perks. And readers -- yes, you -- will have to make a choice, too. Readers are the people generating the hits. You, collectively, decide with your participation and viewership what gets published and which sites get your clicks. If you want a cleaner games media, learn about the ethics policies of the big gaming sites and stop reading those that are so obviously shady.

In this article: advice, advice-column, ask-massively, brianna-royce-ask-massively, ethics, eurogamer, featured, games-journalism, humor, journalism, massively-meta, meta, opinion, pr, public-relations, social-media
All products recommended by Engadget are selected by our editorial team, independent of our parent company. Some of our stories include affiliate links. If you buy something through one of these links, we may earn an affiliate commission.