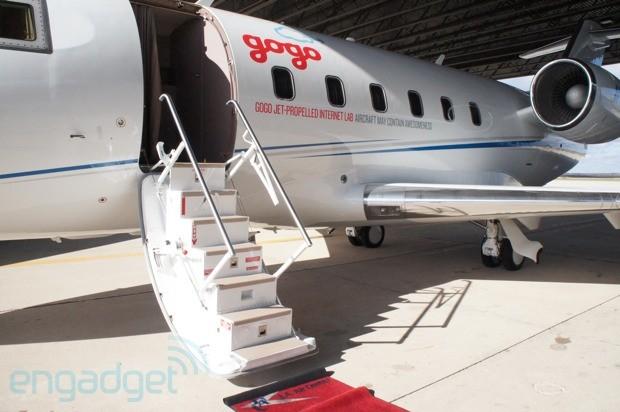 Gogo's test plane isn't your typical jet: it seats just nine passengers, and there's no bathroom; just a closet in the back stacked with networking gear. The company, easily the biggest name in in-flight WiFi, uses the aircraft as a flying lab, where it can test everything from throughput speeds to the log-in experience. It's a small plane that flies out of a small airfield, Aurora Municipal Airport in Illinois, and it's normally just Gogo staffers onboard. Today, the company invited a few reporters aboard to test its newest air-to-ground WiFi service, ATG-4. As you can imagine, newer means faster: ATG-4 is rated for max download speeds of 9.8 Mbps, up from 3.1 Mbps with the last-gen service. It also helps that video streaming services like Netflix, Hulu and HBO Go are now blocked, which should ensure that no one person abuses his WiFi privileges.

As it happens, ATG-4 is already live on approximately 40 planes run by US Airways, Delta and Virgin America. (United has said it plans to introduce the service on select flights in the first half of 2013.) In theory, then, the best way to test ATG-4's performance might be to slip unnoticed onto a commercial flight, and see what it's like to share bandwidth with 20 other people. What's neat about the Gogo test plane, though, is that it can toggle back and forth between ATG and ATG-4, making it easier to compare performance between the two. What's more, though the test plane seats nine, Gogo is able to simulate a crowded flight, with 20 to 30 passengers attempting to use the internet at once. After 90 minutes of flying over Illinois and Missouri, we've got some first-hand impressions and also some pics, if aviation porn is your cup of tea. Read on for more. With this generation of its air-to-ground service, Gogo made a switch from EVDO Rev A. to Rev. B. By all accounts, it's been an easy enough transition for the airlines: the company says the upgrade can be performed overnight and indeed, Gogo often goes to the airlines' facilities to handle the retrofitting. As you can see below, part of the process involves stepping up to a bigger antenna, which is fixed to the underbelly of the plane. The equipment on the ground is all backward-compatible, which helps minimize the need for an infrastructure overhaul. Consider that when you wonder why there isn't HSPA+ on the back end. (Gogo also says HSPA+ would be an inefficient use of its modest 3MHz of spectrum, but that's another story.)

Aboard the plane, there's gear for the last-gen ATG service (you'll find that on the upper shelf) along with an ATG-4 configuration sitting below. Fun fact: the company's Itasca, Illinois headquarters contain testing labs that mimic ATG setup you'll find on commercial planes. There's even a room with airplane seats and overhead bins where the company tests the service with focus groups. (We threw in a photo below for giggles. The slide-up windows are a nice touch, though that's more leg room than we're used to.)

So how's the performance with this new setup? It's not fast, per se, but it's faster. Usable, which is a start. Page loading times dropped noticeably, from 10 to 14 seconds on ATG, to as little as four seconds on ATG-4. File transfers were faster on ATG-4, too, though we'd still advise waiting until you get home to your home WiFi network unless it's really urgent that you share that Facebook album right away. On ATG-4, we were able to upload a 4.1MB photo to SkyDrive in a little over four minutes; that same upload took five minutes and 15 seconds using the last-gen technology. Nota bene: both ATG and ATG-4 compress images, so that alone might be an incentive to hold off on any photo uploads.

At first glance, oddly, this difference in performance doesn't really show up in SpeedTest.net results. Sure, the jump from 0.3 Mbps downloads to 0.81 Mbps rates is something, but our upload speeds held fairly steady, fluctuating slightly between 0.2 Mbps and 0.3 Mbps. We also found that that the ping time dropped by almost half when we moved from ATG to ATG-4 (well over 300ms to 188ms) which suggests latency is much better here. In general, we're willing to take benchmarks like these with a small grain of salt, if only because we have no way of knowing how close we are to the nearest cell site. Still, as we said, real-world performance improved noticeably when we switched to the newer technology.

And yet, much of this improvement doesn't have so much to do with speed but rather, sheer usability. As we said, ATG was fine -- but that's when we there were only nine people on the plane. In that scenario, page loads sometimes took more than 10 seconds, but they loaded. Saving work in Engadget's CMS took three seconds -- again, a little sluggish, but it's better than nothing. Once the Gogo crew simulated a crowded plane, though, we couldn't even load the Chrome browser settings page. On ATG-4, performance still takes a dip, but at least your workflow won't get interrupted. Even with that simulated load, we were able to load web sites in about eight seconds, which is still faster than on last-gen ATG in the best conditions. Fortunately, Gogo says only seven people sign on during the average flight, though ATG-4 can support up to 65 people. That might be the biggest takeaway here: WiFi on planes still isn't very fast. It's just more reliable now.

In this article: aircell, AircellGogo, atg-4, Gogo, hands-on, in-flight, In-flightWifi, InFlight, wifi
All products recommended by Engadget are selected by our editorial team, independent of our parent company. Some of our stories include affiliate links. If you buy something through one of these links, we may earn an affiliate commission.