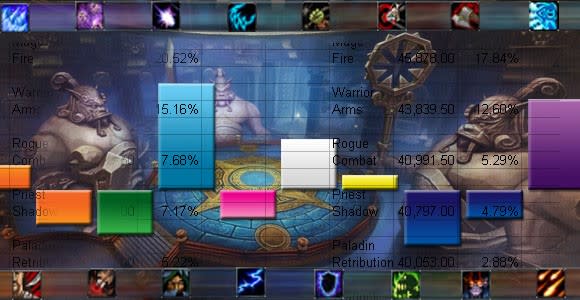 Data from all specs

Let's start off by taking a look at some data from every spec, rather than just the top specs, to get an initial look at the spread.

This information is taken from 10-man normal mode of all bosses. This is a really nice raid size to get a quick snapshot of what's going on. Since most non-LFR raids are now 10-mans, this is the best representation of what players are actually experiencing, and of course we have a lot more parses for normal modes than heroics. Don't worry, we'll be looking into heroics and 25-mans in a bit.

Keep in mind here that we have substantial selection bias against the worst specs of each class, which is going to make those specs appear far worse than they really are. If the top DPSers in the top guilds with the top gear actually played those specs, they'd likely still be behind, but not nearly so far behind.

Here we can instantly see the clear winners and clear losers in the spec race -- and we're also seeing a much broader spread of DPS than we'll see anywhere else (which makes sense, given the spec selection bias issue).

Fire mages and affliction warlocks are way ahead of the pack, with shadow priests right behind. Marksmanship hunters perform the worst (actually off the chart at 38% behind median) with arcane mages and subtlety rogues also incredibly far behind.

This chart pretty clearly tells us is which spec of each class is leading the raids, and which is being ignored by the top players.

Now that we have a bit of a feel for the baseline of all specs, let's narrow things down to just the top-performing spec of each class (including both druid and shaman DPS specs) and see how the classes are really stacking up against each other.

I know we only hit 10-man normal for the all spec data -- but what we're really interested in in how competitive each class is on the charts, and we'll hit every raid type that we can in the class comparison.

Once we start looking at the comparative performance of the best specs of each class, the spread gets dramatically smaller. For 10-man normal we're again seeing mages and affliction locks up at the top, and we're going to have to get used to seeing mages on top. After spending the entire Cataclysm expansion topping the raid charts, the mages are at it again in Mists.

Monks clearly did not get the death knight treatment, and are hanging out at the bottom of the 10-man normal chart, along with enhancement shamans, but everyone else is within the a 5% spread of median, for this raid type anyway.

Looking at heroic 10-man, fury warriors suddenly shoot up to just behind fire mages, with affliction warlocks still doing extremely well. Enhancement shaman take last place as the only other spec that's more than 5% off median.

On the 25-man raid front, starting with normal mode, we still have fire mages eating up the charts by a huge margin, and this time affliction locks have lost some ground at just over 5% ahead of median. Beast mastery hunters get their moment at the bottom nearly 10% below median and elemental shaman switch spots with elemental for second lowest.

Interestingly we have only four specs really sticking their necks out in 25-normal, with the rest within a few percent of the median.

In 25-heroic the fire mages finally relinquish their top spot in favor of fury warriors. Everyone above the median is less than 5% above, while we have four specs substantially below. Elemental shaman, BM hunters, balance druids and shadow priests are all showing pretty poorly in 25-heroic.

There is, however, one more raid type to check. Given the huge popularity it's worth taking a look at what LFR raiders are seeing. I'm including this for the sake of interest and completion. To be blunt, you really don't need to be tightly optimized to succeed or to guarantee a raid spot in LFR.

LFR actually shows us a surprisingly similar picture to 10-man normal, with fire mages and affliction locks topping the charts by a large margin and monks down on the bottom. We only have three specs in LFR beyond the 5% margin, and those are all above it.

The DPS balance of the classes so far in Mists is still better than it was in Wrath and before, but not quite as tight as at the end of Cataclysm. Certainly from what we're seeing right now it's fair to say that both fire mages and affliction warlocks are deserving of some nerfs. Mages in particular are seeing the same kind of giant lead ahead that they were seeing in Cataclysm, and they are very overdue to be brought into balance (alternatively, perhaps it's about time for DPSers to finally admit that if they want to DPS, they should reroll mage).

On the buff end of the spectrum, the picture isn't quite so clear with 10 and 25 raids showing us a slightly different picture. Certainly monks, shamans, and BM hunters should all be looked at closely and considered for some DPS lovin'.

While we always want every spec to be well-balanced, from the class perspective it doesn't look like anyone is performing so poorly that their class is in danger of not being invited to raids. On the other hand, we do have a couple classes doing so well that raids are going to benefit from class stacking them, which is something I very much hope gets fixed in 5.1.

Unless you're a mage, of course. Then everything is fine. << Back to previous page
All products recommended by Engadget are selected by our editorial team, independent of our parent company. Some of our stories include affiliate links. If you buy something through one of these links, we may earn an affiliate commission.