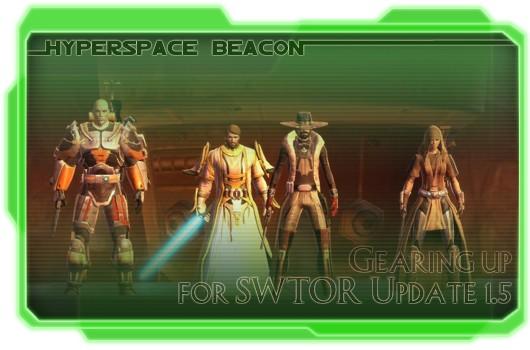 Star Wars: The Old Republic fans have been anticipating this week since the middle of the summer, and many players who dropped the game shortly after launch are looking forward to trying it out again. Veteran players are most likely familiar with how gear progression works in this game, but those returning will probably need a refresher course. After all, BioWare has made some significant changes, especially to PvP, since the game launched. It's quite understandable if you return to the game and are completely lost when considering how viable your current gear is.

Today, I'm going to speak to the returning players and help them put their gear to rights once Update 1.5 launches. If you are a solo PvEer who hasn't looked too hard at endgame gear progression, a PvPer who hasn't looked at the PvE side much, or a raider who wants to dabble in PvP, this mini-guide will help you get started and will give you the gear-progression goals you should shoot for.

If you PvPed in SWTOR between the start of the game and Update 1.2, then you will remember the convoluted series of commendations and grab bags that gaining PvP gear used to be. Mercenary Comms, Centurion Comms, Champion Tokens, Champion Comms, and Battlemaster Tokens are things of the past, thank goodness. It had to be one of the top five most mixed up armor progression systems I'd ever seen, and thankfully, now you can turn all those items in for standard warzone comms at the PvP vendor in the Combat Training area of the fleet.

Now it's been streamlined. Progression is quite simple. There is no more open-world PvP, a result of the Ilum issues. Standard level 50 warzones grant you warzone comms. There is a variety of items you can gain from these comms -- everything from pre-50 weapons to stims and medpacks. At valor rank 40, players can begin to purchase ranked warzone comms from the PvP vendor near the PvP mission terminal. These tokens can also be gained by running ranked warzones. Ranked comms are used to buy the higher-level gear like War Hero armor as well as vehicles and pets.

Endgame PvP progression should start before you even reach level 50. As you level, you can gain only as much valor rank as your current combat level, so you will not be able to purchase ranked warzone comms until level 40, but you can buy gear that is useful in both PvP and PvE until then. In fact, I recommend that you do just that as soon as possible. You will also want to buy medpacs as well if you have the extra comms. You will really regret not having those when you hit 50 and all your comms go into buying gear. Also as you're leveling, be sure to watch the number of warzone comms you have. You can carry a maximum of 2000 warzone comms.

Once you hit valor level 40, you will want to start buying ranked warzone comms. If you start this at combat level 40, it will give you a head start for level 50 PvP. If you have no comms at level 50, you're not completely out of luck; it's just life will be a little more difficult for you. No matter whether you have zero comms or a truckload when you hit 50, buy recruit gear. Currently SWTOR has Recruit MK-2 gear, and this gear is given to you for free from the PvP mission terminal.

After recruit gear, if you have the ranked comms, your most important item to buy is the War Hero main hand. This weapon will give you not only a significant boost in expertise (the PvP stat) but a gigantic boost in overall damage. From that point, you will want to build up your expertise stat, in general. Get the most bang for your buck. Believe it or not, the most expensive items are not always the best way to go. I usually start with relics. These items do not require that you buy another piece of gear first (like the War Hero armor), and relative to the other pieces of armor, they are very cost effective.

As in any MMO focused on progression, PvE is not always as straightforward as it seems. The simple version of PvE progression starts with Tionese gear, then Columi, then Rakata, then Black Hole, then Campaign, then lastly, Dread Guard. However, as all veteran MMO players can attest to, PvE progression is never that easy because of power creep, and gear stats don't always match up with their usefulness.

Believe it or not, the best place to start is with Recruit gear. Get the PvP gear first. For the most part, this gear contains better stats than Tionese gear and is certainly easier to get. If you're in a guild that runs operations, then running operations via the group finder will be very easy. Otherwise, I suggest you run group finder and do random hard-mode flashpoints. You will gain not only Columi gear from bosses and Columi comms from missions but also Black Hole comms, which can, of course, be used to purchase Black Hole gear. I have seen characters able to practically skip both Tionese and Rakata gear because they have gained so many comms.

Also consider specific stats. Sometimes, the stats of a given set of armor do not give you the optimal stack. Some will disagree with me (and there are definitely good arguments to the contrary), but I like to stack power before critical strike rating on my DPS characters. When you're mixing and matching gear and mods, your priority should look like this: accuracy 110% (main hand), class stat, power, surge rating, then critical strike rating. On healing characters, I like to put crit before power, using class stat, Force/tech power, critical strike, surge rating, and then power. (Alacrity is usually built on its own.) On tanks, endurance is most critical because that builds health directly: Aim for accuracy 110% (main hand), endurance, and a balance of shield, absorption, and defense. If you need some help balancing your gear or if you'd like to look ahead at what you can or should get, check out my write-up on some of the tools for endgame.

Before I go, I want to recognize another anniversary on November 15th. As you know, I was a huge Star Wars Galaxies fan. I played the game very early on up until the servers shut down. On November 15th, 2005, Sony Online Entertainment and LucasArts with Producer Julio Torres launched the most significant change to the title: the New Game Enhancements (NGE). Many fans of the game quit shortly after the release of this change to the combat system.

I don't believe that SWTOR producers are intentionally releasing free-to-play on this date for any reason other than that it is the ready date for the product. But as a Star Wars, SWTOR, and SWG fan, I'm hoping that these two changes that hold a similar purpose don't hold a similar outcome. Maybe SWTOR will redeem this date in gaming history.

In this article: bioware, classic-mmo, ea, electronic-arts, f2p, featured, free-to-play, galaxies, game-update, gear, gear-progression, hyperspace-beacon, lucasarts, NGE, november-15, opinion, patch, PvE, PvP, sandbox, sci-fi, soe, sony-online-entertainment, star-wars, star-wars-galaxies, star-wars-the-old-republic, swg, swgo, swtor, the-old-republic, tor, update-1.5
All products recommended by Engadget are selected by our editorial team, independent of our parent company. Some of our stories include affiliate links. If you buy something through one of these links, we may earn an affiliate commission.