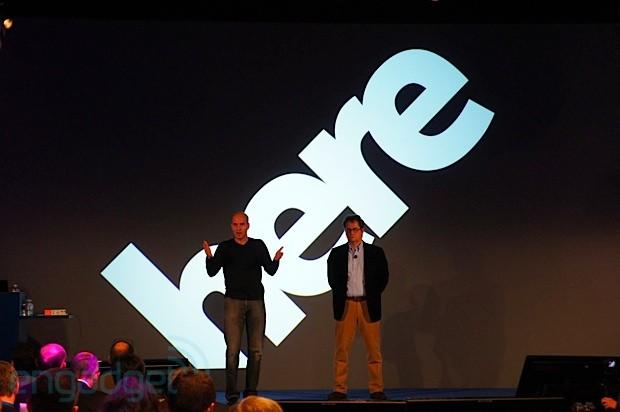 Nokia's revealed the next stage in its cartographic future and it involves a new cloud-based service. Titled "Here," it'll tap into Nokia's map expertise and better still, work across multiple devices and operating systems -- CEO Stephen Elop, attending the event in San Francisco, also referenced recent purchase of Earthmine, a 3D mapping company that will help the company offer StreetView-style digital vistas. The new web-based map (that's live now) will work on any PC running Internet Explorer, Firefox, or Chrome and Macs using Safari, Firefox or Chrome. On mobile, it'll run on iOS 4+ and Android 2.2's (or above) internet browser. According to AllThingsD, a free iOS app has already been submitted to iTunes, pending Apple's approval in the 'next couple of weeks'. Additionally, Nokia will have a Here SDK for Android and a web version of Here maps for Firefox OS ready by early next year. Behind the glossy HTML5 exterior, Nokia reckons its "capture, compute, experience" system, and its cloud-based processing will offer a more potent offline experience. Nokia's not stopping there, however. The Finnish phone-maker has apparently seen 75 times more use of its mapping data compared to last year, and it's looking to tap into user-submitted data. A new Map Creator tool will let people assign more specific information and detail to Nokia's original maps and satellite photos. The phone-maker's already launched its own site for the new location service, Here.net, and aims to fold in users' submissions into its own official map offering. Collections will let you store and share your favorite locations, while Explore (replete with its own map button) will let you know what's available in the immediate vicinity. The maps will also contain all of the previous Nokia functionality, including live traffic information and transit directions.

Here appears to encompass most of Nokia's previous mapping services and apps -- take a look for yourself at the source below.

Update: We've got a few more tidbits about Here to share with you. It turns out, the iOS app will provide offline maps, voice guided walking directions and public transportation directions at launch. Additionally, Nokia revealed the name for the technology powering its City Lens app. Called LiveSight, it's a 3D map technology that Nokia claims "provides the most precise and intuitive augmented reality experience" that we presume will find its way into other applications. PR with full details of all the cartographical goodness await after the break.

Nokia extends its service across devices and operating systems

"People want great maps, and with HERE we can bring together Nokia's location offering to deliver people a better way to explore, discover and share their world," said Nokia President and CEO Stephen Elop. "Additionally, with HERE we can extend our 20 years of location expertise to new devices and operating systems that reach beyond Nokia. As a result, we believe that more people benefit from and contribute to our leading mapping and location service."

To further extend its location services, Nokia is launching a maps application for iOS under the HERE brand. Based on HTML5, it will include offline capabilities, voice-guided walk navigation, and public transport directions. The application is scheduled to be available for free download from Apple's App Store in the coming weeks.

Nokia further announced a strategic partnership with Mozilla to bring new location experiences to the Firefox OS. Nokia plans to debut a mobile Web version of HERE Maps for the new Firefox OS next year. The companies are working together to give people the best mapping experience on Firefox OS.

"Mozilla is a leader in HTML5, building the Web as a platform for developing compelling applications, and location is a key part of that platform," said Jay Sullivan, Mozilla Vice President of Products. "We are excited to work with Nokia as the combination of Firefox OS and HERE's location platform provides rich possibilities for mobile application developers to create amazing experiences for users."

Nokia also demonstrated an Android OS-based reference application and announced plans for the availability of a HERE SDK for Android OEMs in early 2013. This is aimed at enabling partners to create location-based applications for Android devices with Nokia's leading content.

Nokia expects the transaction to close by the end of 2012.

"Maps are hard to get right - but location is revolutionizing how we use technology to engage with the real world," said Michael Halbherr, Executive Vice President of Location & Commerce and responsible for the HERE brand. "That's why we have been investing and will continue to invest in building the world's most powerful location offering, one that is unlike anything in the market today."

Using LiveSight(TM) to see more of the real world
As part of its announcement, Nokia introduced LiveSight(TM), a technology based on a highly accurate, 3D map of the world. LiveSight(TM) provides the most precise and intuitive augmented reality experience and uses a phone's camera viewfinder to make discovering the world as easy as lifting up a phone. Nokia City Lens, which was developed exclusively for Nokia Lumia devices, is the first application providing a LiveSight-enabled experience.

"Establishing a new brand is the right move for Nokia in the map and location business. Nokia's assets in this space are world class. We believe mapping and location will be increasingly important to developing next generation devices and services across a wide array of segments," said Crawford Del Prete, Executive Vice President and Head of worldwide research at IDC.

BERKELEY, CA – November 13th, 2012 – earthmine Inc. announced today that it is has entered into an agreement to be acquired by Nokia. earthmine, based in Berkeley, California, is a privately-owned company that develops a powerful end-to-end 3D street level imaging solution - from collection hardware to processing workflows, cloud hosting and client software.

The earthmine team is expected to join the Nokia Location & Commerce business and Berkeley, California will become a key site for the development of 3D reality capture technology.

"We are very excited to be joining Nokia – a company with a huge presence and vision in mapping," said John Ristevski, co-CEO of earthmine Inc. "We could not hope for a better place to fulfill and accelerate our mission of indexing the world in 3D.

In this article: mobilepostcross, nokia, nokiahere
All products recommended by Engadget are selected by our editorial team, independent of our parent company. Some of our stories include affiliate links. If you buy something through one of these links, we may earn an affiliate commission.