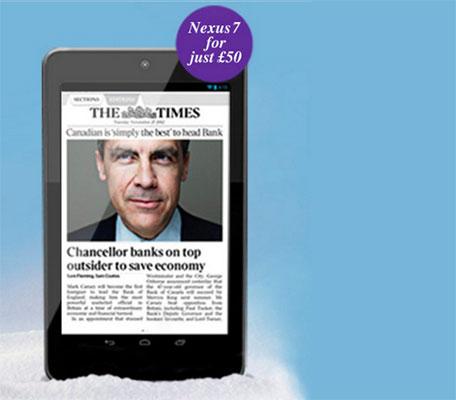 While News Corporation's big tablet newspaper experiment, The Daily, may have ended with a whimper, it's not stopping the global media company trying new strategies to pick up more (paying) digital readers. The Times, one of the only UK national papers to keep its content firmly behind a paywall, has decided to offer a discounted Google Nexus 7 tablet alongside its digital subscriptions. Knocking £149 from the original £199 price of the 32GB Nexus 7, the device will arrive accompanied by an 18-month subscription with access to the full site and its mobile apps, costing £18 per month, discounted to just shy of £300 in total if you're willing to pay it all upfront. However, it's not the first time we've seen a news organization fold in a gadget incentive for new subscribers -- Barnes and Noble offered discounted Nooks alongside one-year subscriptions to The New York Times at the start of the year. UK readers can check out the deal at the source below.

In this article: asus, google, minipost, NewsCorp, newsinternational, nexus7, TheTimes, UK
All products recommended by Engadget are selected by our editorial team, independent of our parent company. Some of our stories include affiliate links. If you buy something through one of these links, we may earn an affiliate commission.