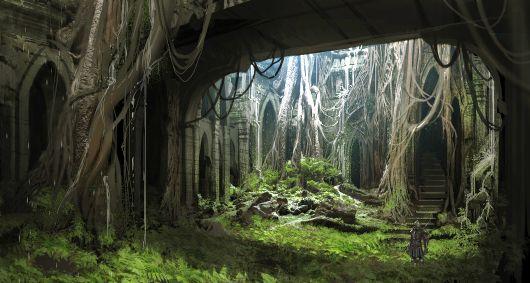 Fantasy, at this point, is almost tragically boring.

That seems like a contradiction in terms. A fantasy setting is supposed to be fantastic by its very definition; you should be surrounded by neat and astonishing things at every term, immersed in a rich and baffling setting where magic is a valid explanation for almost everything. Unfortunately, we've seen so many versions of the same old fantasy setting that it's become boring. It's another round of the same elements with slightly different names, and while you can give them floppy ears and call them Asurans, they're still just gnomes with better public relations.

So let's stick a fork in it and say we're done... or maybe not. There's some fantasy out there that could be collected into an interesting state, I think, something a bit further afield of the bog-standard elves and humans and dwarves dealing with dragons and whatever else. So let's mash this stuff up in a blender and see if we can't come up with some fantastic fantasy again.

Those of you who were unlucky enough not to be around pen-and-paper roleplaying in the '90s really missed the boat on Planescape. And that's a shame because it was nothing short of brilliant.

See, instead of having strange multiplanar antics as the endpoint of adventuring, Planescape started players out right there. The setting was based in Sigil, the City of Doors, a hub between all of the far planes. This was a place where you could very easily jaunt over to Heaven for the afternoon, stop in Hell to buy dinner, and then head to bed in a district surrounded by beings of pure order. It was evocative, it was strange, it was surreal, and it was tied together by DiTerlizzi art and slang terms derived from the Victorian underclass.

It had all of the fantasy trappings, of course. Except instead of the forest of the elves being a bit down the road, there were planes that consisted of nothing but forest, planes where the forest was home to ancient predators that themselves had even grander predators. The sky was the limit.

Of course, I'd be remiss to not toss a bit of the baroque feel from Final Fantasy XI and Final Fantasy XIV in the mix. Those games are unambiguous fantasy, sure, but they're more rooted in the late Renaissance than European feudalism, and the result is a society that feels more ordered and structured. It's all fantastical, but it's not the same old castles and knights you see all the time.

I'm going to cherry-pick these a bit. Most fantasy games seem to be choked with all of the standard offerings with one or two unique races. I think that's a bad way to go. No elves, no dwarves -- I want a quintet of races that are unique from the start. And aside from humans, I have four easy picks.

World of Warcraft gives us the Draenei. I absolutely adore the Draenei, always have, and I think they're one of the more unique things that WoW has to offer. They're pseudo-Russian angel demons from space. I'd love to see them in a setting where the races as a whole isn't ignored by the next expansion.

Final Fantasy XIV gives us the Roegadyn. Aside from having a name that I am entirely incapable of spelling without an external reference, the Roegadyn are hulking beasts that sadly lack the tails of their predecessors in Final Fantasy XI but make up for it with their women. Seriously, Roegadyn women are awesome. They're huge, muscular, hirsute women who manage to look distinct from human women while being notably feminine.

Guild Wars 2 gives us the Sylvari, probably my single favorite race from the game. I was originally on the fence about having plant-people, but the game goes the length to make it clear that these are humanoid plants as much as anything. Elves always seem to love nature just because; Sylvari love nature because they also need fresh air and sunlight.

Last but not least, TERA gives us the Castanics. I'm not happy with how TERA handles a lot of things, but I think the Castanics get short shrift in that game, where they're largely used as eye candy. Personally, I'd like to see a game that can handle mature themes examine a race relentlessly focused on provocation, seduction, and ambition. There's a lot of potential there, and I think with a bit of work they could shine.

All too often, fantasy focused on fighting the Evil Wizard Collection of Syllables or the Evil Dragon Whose Name Consists Of Scary Nouns or The Evil Warlord Who Is Not Darth Vader Really We Mean It. Some novels do better than that -- George R.R. Martin and Tad Williams have both done excellent work with fantasy where the focus is on more believable conflicts -- but most games still seem to think that the point of the Lord of the Rings novels was fighting Sauron (whom we never actually see).

Dragon Age doesn't go that route. The first game has you facing a supernatural threat, but many of the conflicts you encounter are a product of simple human behavior rather than that supernatural threat. Dragon Age II is entirely a human story, with the only magical threat coming about as a result of the internal conflicts. Let's see some of that energy in a game's setting, a place where the big threats are people. Sure, given the setting those people may very well be lords of an outer layer of the underworld, but people first.

If we want to focus on the idea of human conflicts in a fantastic setting, the idea of national boundaries bears exploring. Especially when the nation in questions can consist of an entire world with physics that operate differently from those of other worlds.

Imagine a game where you act in service to one plane or another. Your actions in independent city-states improve or damage the image of your plane in the eyes of others. Meanwhile, you're working on expanding, securing land, convincing your governing members to construct a new city here or there or wherever. It's a dance of reputation, gathering intelligence, trying to curry favor across a landscape that can be expanded in almost any direction.

Admittedly, Civilization V works from the top down, where this is from the bottom up. But it's a way to bring players into contact and conflict organically through a set of ordained action, and with a little bit of GM massaging it would feel like wars between planes erupt naturally and are stoked on just like the backdrop of a novel.

FFXI offered players a wide variety of stories, long series of linked missions that sent you all across the world in pursuit of knowledge. Star Wars: The Old Republic gives every character a class story arc to follow, along with smaller arcs woven into each planet you visit. Combine the two, and you have a large number of stories that branch in different directions, where you might start from similar points and intersect in certain areas but you'll never wind up with another person's progression.

Of course, this is only the tip of the iceberg. I haven't even specified a combat system. (Although I imagine a large part of my first Blender could be ported into this setting, as there's space for one to fit within the other.) But I think this would go a long way toward recapturing the core of what fantasy can be. It's not about having elves and swords and kings; it's about a world of magic and politics and fascinating places and great acts.

It'd be fantastic, is what I'm saying.

In this article: ambiance, armchair-game-design, emotion, epic, fantasy, fantasy-genre, favorite-mmo, featured, feel, game-design, game-mechanics, mechanics, mmo-blender, mmo-mechanics, mmo-mix-tape, mmo-mixology, opinion, setting
All products recommended by Engadget are selected by our editorial team, independent of our parent company. Some of our stories include affiliate links. If you buy something through one of these links, we may earn an affiliate commission.