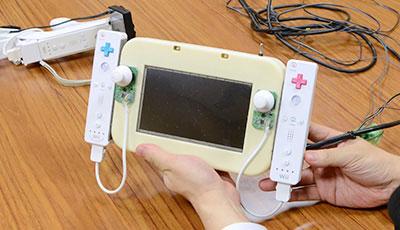 You have to start somewhere. In a group interview between its CEO and several software developers, Nintendo recently touched on how the Wii U's primary controller, the GamePad came into being. Initially, development focused on a "Wii Zapper" with a small screen and a gyroscope connected to a Wii remote and nunchuk, feeding movement data to the display. This was soon subsumed into the 3DS, which was nearing the end of its design process. In fact, Nintendo titan Shigeru Miyamoto recalled the original 3DS handheld plans to add the gyroscope, even though hardware features had been "set" internally. This early model, however, catalyzed the idea of a second screen for the players' hands and lead to the barebones hardware you can see above. Crafted from double-sided tape and two Wii remotes, the prototype brought forth ideas for Nintendo Land -- and if we're honest, is a fairly decent outline of what the final product resembled, with buttons and controls (including triggers) distributed across both sides of the screen. Interested in the full development story of both the GamePad and Nintendo Land? Then you'd best visit the source link.

In this article: gamepad, nintendo, nintendo+wii+u, nintendowiiu, prototype, wii+u, wii+u+gamepad, wiiu, wiiugamepad
All products recommended by Engadget are selected by our editorial team, independent of our parent company. Some of our stories include affiliate links. If you buy something through one of these links, we may earn an affiliate commission.