Gigabyte X11 review: slim and powerful but not without flaws

Gigabyte was certainly feeling brave when it unveiled the £857, 11.6-inch X11 Ultrabook earlier this year. Appearing shortly before the arrival of Windows 8, it straddles two OS life cycles, with a feature set that's more faithful to Windows 7 than to the touch-centric future. Still, with a Core i5 Ivy Bridge CPU, 4GB of RAM and a 128GB SSD, the current holder of the "world's thinnest Ultrabook" title is specced to compete -- and, as you'd imagine, this is a fast and powerful little machine. But has Gigabyte sacrificed compelling features to achieve the X11's extra-skinny frame? Join us after the break to learn if this unit, only available outside US, is worth the import fees. 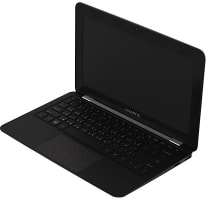 Gigabyte really talked up the sports car stylings of the X11, but this machine is clean and sleek rather than loud and gaudy like Acer's Ferrari-branded range. In fact, we'd go so far as to say this is one of the most elegantly designed units we've come across, not straying too far from the MacBook Air's clean lines. It comes wrapped in a similarly carbon fiber-esque sleeve, which makes it look deceptively like the owner's manual for a hypercar rather than an ultra-svelte notebook.

The model we tested isn't a production-line unit, but rather a hand-built exemplar for reviewers. It weighs in at 983 grams (2.16 pounds), but we're told the finished models will only be 975 grams (2.14 pounds) -- which the company claims makes it the lightest Ultrabook available. However, given the speed at which these devices are being developed, we doubt it will maintain that title for very long. The only other difference, we're told, is that the finished model will have a Windows 8-style keyboard (with Microsoft's new logo, rather than the bilingual one you'll see in our photos).

The X11's wedge-shaped body is 13mm (0.5 inch) thick, tapering down to about 6mm (0.23 inch) at the front. A chrome hinge holds two pairs of "sports car" air vents, which look far more attractive than the cooling system you see on most devices. The minimalist design touches and the woven carbon fiber pattern make the X11 look every inch the high-end device -- in fact, we think this device would be right at home placed beside Vertu smartphones and mountain goat-hair-lined Armani suits in a top-line department store; it's that good looking.

Running down the left side are power, USB 3.0 and Mini DisplayPort slots, while the right is home to USB 2.0, a 3.5mm headphone jack and a microSD slot. The latter is an unusual choice, but other 11-inchers like the Zenbook Prime UX21A forgo a memory card slot altogether, so it's at least nice to have removable storage to supplement the non-expandable 128GB SSD.

The 11.6-inch, 1,366 x 768 backlit LED display is surrounded with a bulky, 2cm bezel on all four sides -- making the screen itself seem comparatively bijou and cheapening the look of this otherwise-classy design. Above it, front and center, is a 1.3-megapixel webcam that cranks out 620 x 480 stills, which will certainly hide any of your more notable blemishes, wrinkles or, you know, facial features. Still, it'll do for those quick-and-dirty Skype chats you invariably have when you get a new device.

For all its good looks, the X11 causes a fair share of headaches when you actually get it in your hands. First up, while carbon fiber is strong and light, it also lacks a certain rigidity. We could bend the lid a good five degrees before we encountered resistance -- and we only stopped there for fear of breaking the device. The bottom plate is secured with six mounting screws, but -- at least on our hand-built review unit -- it doesn't match the frame it's attached to. That means that one side can be pushed in several millimeters with an audible creak, a build-quality issue that Gigabyte says has been fixed in the production-line models.

Glossy products are legendary for attracting fingerprint smears, and this device's shell made it look as if we suffered from a sweating condition even after we'd dried our hands to the bone. Take this outdoors without having wiped it down with a lint-free cloth, and people will start to make dubious assumptions about your character. While this is meant to be a premium product, the smear-attracting shell, dodgy build quality and bezel-heavy display rough away some of its initial glamour.

The X11's island-style keyboard looks comfortable to use, but here, too, first impressions are deceiving. The keys offer a few millimeters of travel, but the sensitivity of each chiclet varies so much that you'll need to learn which need hammer hits and which need light taps to avoid a double type. Our reviews must be written on the devices that we're using, and the original text of this paragraph read:

"The keyboard sitsveryflsh and doesnt have tooomuch travel,but the keys vary wildly between toosensitive and not sensitiveenough,so while the spacebar requires a hefty hit toget it to register (it transpires that the sensor is mounted toofar on the left)"

You'll just have to believe us when we say our typing skills are not that bad. Clearly, the spacebar suffers from the same unresponsiveness as some of the layout's keys, and the armchair engineer in us thinks that a switch is mounted too far to the left. If, like us, you use your right thumb to hit the spacebar, you're going to find your presses register only half of the time.

Also standing in the way of productivity is the Sentelic trackpad, which clearly wasn't properly calibrated for palm rejection. Lean your hand too far for a millisecond, and your cursor will leap up into your already-written text, rendering it gibberish. That sensitivity makes general use a frustrating, fiddly experience, with phantom clicks and drags showing up constantly.

While the touchpad is overly responsive when it comes to accidental movements, it seems to have the exact opposite problem with intentional input: clicking and dragging files between folders took patience and a good run-up, and more than a few unpublishable utterances were directed towards this machine's maker during our hands-on time. And this is with Windows 7; just imagine how much worse it would fare when running the much more gesture-friendly Windows 8.

We've already groused about the bezel around the 11.6-inch, 1,366 x 768 display, but the panel itself is also glossy (a regular annoyance), and colors are a bit too dark and washed out no matter how much you tweak the settings. For example, bright reds are muted to a ruddy brown, while shades of green and blue often blend into each other. On the plus side, the 300-nit screen can certainly battle against the sunlight, and at full brightness is strong enough to burn a few retinas -- always a good sign, given how so many laptops have weak backlighting.

The X11's stereo speakers are tucked inside the unit's hinge. At full volume, they'll certainly fill a room, but will be accompanied by a rattling noise that sounds like someone's put paper over the speakers. Sound is still a bit harsh when you've gone past, say, 75 percent, so when we watched a few Rifftrax movies on the machine, Kevin Murphy's sonorous voice caused us a little too much pain.


It shouldn't be surprising that Gigabyte, with its history of making PC components, knows how to stitch 'em together into a neat and speedy little package. If we had to choose a word to describe this X11's everyday performance, it would be "nimble." It takes 17 seconds to boot from cold, and most programs spring into life as soon as you've clicked them. When taxing it out with multiple browsers running 20-plus tabs, you'll hear the fans kick into top gear, and while you can't say they aren't audible, the noise is not so jarring as to be distracting. The X11 might not be a gaming machine, but when we took the relatively undemanding XCOM: Enemy Unknown for a spin, it could only manage a meager 18 fps. When benchmarked with more general-performance tests like PCMark7, though, Gigabyte's Ultrabook came out ahead of the IdeaPad Yoga 13, Satellite U925t and XPS 12, and with 3DMark11, was even able to beat Acer's Aspire S7.

Whatever gains were made in the thin-and-light categories by shaving valuable grams and millimeters from the X11's body were instantly lost when Gigabyte tossed in a paltry 35Wh battery. What does that mean in practice? After just two hours of heavy, Engadget-level use, we were hunting around for a plug socket.

Alas, Gigabyte has managed to break Engadget's record for shortest Ultrabook battery life. The company rated the X11 for about five hours of use, but on our battery test (with a video looping off the local drive, WiFi on and brightness fixed), it managed just 3:37 before conking out. We ran the test again, hoping it was an aberration, and the second result was worse, with it lasting 3:31! That means you might not make it through The Lord of the Rings: The Return of the King, and it won't outlast a non-stop flight from Dallas to New York. It's 20 minutes less life than you get out of a Vizio Thin + Light and an hour less than we managed to squeeze out of an Acer Aspire S7 -- two units that didn't exactly wow us in the battery life department either.

Gigabyte clearly didn't want to muddy its inventory channel with a flotilla of hardware choices, as there are only two versions of the X11: a base unit with a 1.7GHz Core i5-3317U and a higher-specced version with a 1.9GHz Core i7-3517U. Aside from that, you have a choice of Windows 8 or Windows 8 Pro, alongside which you'll get Microsoft Office starter edition and Bing thrown in for good measure. In the UK, the unit is under Gigabyte's warranty for two years -- except for the battery and AC adapter, which are only covered for a year.

The crop of current-gen Ultrabooks includes Toshiba's Satellite U845 (starting at $750), which packs a Core i5, up to 6GB of RAM and a 32GB SSD / 500GB HDD combo; MSI's S20 Slidebook ($1,200), with a Core i5, 4GB RAM and a 128GB SSD; or the smaller of Acer's Aspire S7 range ($1,200 and up for the 11-incher) -- with the same choice of Core i5 / i7, 4GB RAM and a 128GB SSD. This trio clocks in with similar performance and price points, although the latter suffers from a similarly weak battery life. And yes, lingering there, in the corner, is the 2.8-pound, similarly specced, entry-level 11-inch MacBook Air -- although if you're wedded to Redmond's OS, you'll have to the factor in the additional cost of a Windows license.


To borrow a metaphor from the world of soccer, the X11 is a "highlights player." The sort that dazzles you with tricks and flicks when you catch the edited tidbits, but fails to impress when placed under any sort of scrutiny. Admittedly, our unit was a pre-release model, but if Gigabyte feels that it's representative of the package as a whole, then we won't pull our punches.

Broadly speaking, the X11 has plenty of plus points, including whip-fast performance and a gorgeous, startlingly light design. It's when you settle down and start using this machine, though, that you begin to realize you'd been had. Serious, fatal flaws begin to appear: a flimsy shell, a horrible keyboard and trackpad and battery life that strains credibility. If your livelihood relies upon being able to use a laptop for long periods of time -- and, well, typing -- do yourself a favor and find another Ultrabook. If we sound bitter, it's because we are. We were initially seduced by the X11, but before long, its considerable drawbacks began to bubble toward the surface. Perhaps if the company learns its lessons, it can make it up to us next time around.