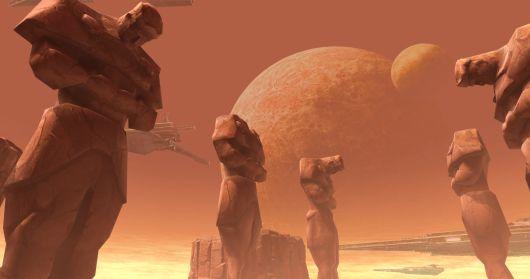 Gamasutra's Simon Ludgate lays into the makers of Star Wars: The Old Republic with a recent article that takes a look at all the things BioWare did wrong with the greatly hyped MMO.

"SWTOR's 'end-game' was anemic at best, especially compared to the well-received storyline content." Ludgate writes. "Surprise, surprise; most of the people who paid for the game didn't continue subscribing after playing through the story once or twice. Between the annoying grind and the recycled content -- another one of those annoying MMORPG tropes -- the game's single player content ended up being even less fun than a normal single player game, never mind the subscription fee to keep replaying it."

Whether you agree or disagree, Ludgate takes an in-depth look at everything that he sees as wrong with the game. From a broken cash shop ("Fifty-Six Dollars per Month. That's what it costs to play Star Wars: The Old Republic as a free player.") to the anomaly of fitting a single-player game into an MMO ("BioWare spent most of its money on single player story content, wrapped up in all the worst time-sink tropes that pervade the MMORPG genre"), the gloves are off in this one.

Check out the entire 3-page article over at Gamasutra, and let us know what you think in the comments.
In this article: bioware, ea, electronic-arts, f2p, free-to-play, gamasutra, impressions, lucasarts, sci-fi, simon-ludgate, star-wars, star-wars-the-old-republic, swtor, the-old-republic, tor
All products recommended by Engadget are selected by our editorial team, independent of our parent company. Some of our stories include affiliate links. If you buy something through one of these links, we may earn an affiliate commission.