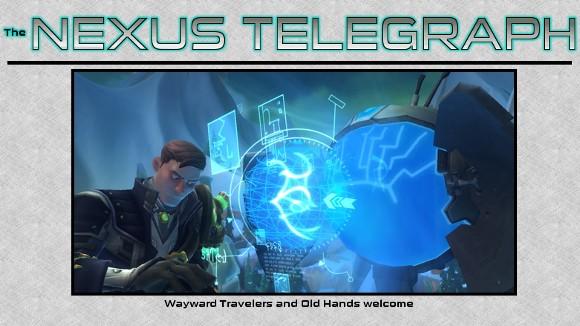 Let's talk about WildStar. Do you want to? I'd reckon you do, considering that you're reading this now. A lot of people want to talk about it, after it showed up more or less from nowhere with a striking look, spectacular setting, and the promise of several interesting gameplay systems, all from a studio that looked from the outside to have been catatonic before this came riding onto the scene.

The point is that WildStar is kind of a big deal. It's novel, it's exciting, and it's as different a take on the science-fiction genre as you could ask to have. Unfortunately, it's also still not released. But we've had a year of solid information to chew on, and as a result I'm happy to present the first installment of Massively's new column, The Nexus Telegraph. This week we're going to kick things off with a look at some important links, just to start things from a solid foundation... albeit a smaller one.

Official Site -- You have to start somewhere, right? Well, WildStar's official home on the internet does a better job than most of keeping players engaged, even though the game itself isn't out yet. The site has been keeping up a regular set of dispatches from the development team in the form of WildStar Wednesday and the WildStar Community Roundup. Odds are pretty good that you know this site already, but on the off chance you didn't, here you go.

Official Facebook -- There's stuff on the Facebook page that doesn't make it to the main page. You might be annoyed by the idea that some of the important elements of the game are locked behind social networking, or you can just be happy that there's more to be found by dedicated fans. I leave that decision to you, but at least it's a bit less hidden now.

Official YouTube Channel -- Again, there's stuff here that doesn't wind up on the main page all the time. Some of it is fairly irrelevant, but the fact that there's a song made by the team in response to a fan-written poem is endlessly awesome.

WildStar Central -- It's a little early for a lot of fansites to exist for the game, considering it's not even in closed beta at the moment. But WildStar Central is out there, taking those reluctant steps into creating a community that may or may not bolt as soon as the game is released. (It's always touchy prior to launch.) The forums are active, the site keeps up with the official updates, and it's a good place to start! And stop, for some.

WildStar Wiki -- An offshoot of Central, this is exactly what it says on the tin. Right now it's a good compilation of lore information that we've received thus far; how it will split things between lore and game information in the future remains to be seen.

WildStar-Guide (French) -- If you're a fan of the game and you number French among your native languages, well, here's a French fansite. I must admit that despite my name, I'm not particularly fluent, so I couldn't tell you how good the site is as a whole, but it does exist.

@Team_Wildstar -- The official feed for the game and home of the weekly #WSuplink community question.

@Carbine_Studios -- If you'd rather head to the official corporate side, there's a separate Carbine feed. There is some stuff that goes here but not on the game feed, for the record.

@WildStarCentral -- Yes, the inaugural fansite also has its own Twitter feed, which is a good thing. If you want more chances to join in on active forum discussions, this is the feed to follow.

Think this list is a bit short? Know something I don't? Leave it in the comments or mail it along to eliot@massively.com. No matter what, when we come back for another installment, I'm diving right into the deep end of the pool to talk about style, atmosphere, and why WildStar is hitting the right notes thus far.

In this article: carbine, carbine-studios, column, columns, fansites, featured, feeds, links, ncsoft, news-feeds, nexus, nexus-telegraph, official-sites, opinion, sandpark, sci-fantasy, sci-fi, the-nexus-telegraph, twitter, wildstar, ws
All products recommended by Engadget are selected by our editorial team, independent of our parent company. Some of our stories include affiliate links. If you buy something through one of these links, we may earn an affiliate commission.