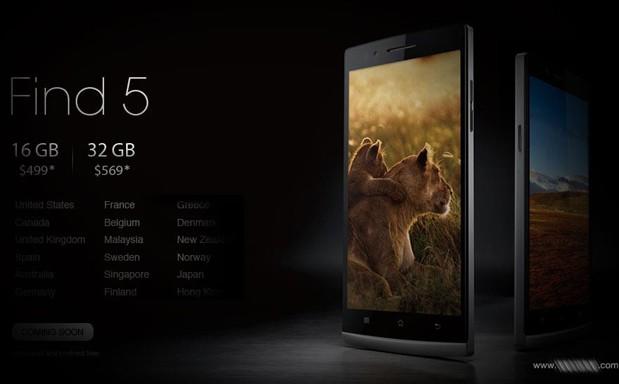 Ho ho ho! Even on this special day, the folks at Oppo decided to drop a bomb on its "Ofans." According to a fresh teaser on its Facebook page, not only will Oppo be offering the $499 16GB version of the quad-core, five-inch 1080p Find 5 in the US (as we already knew), but there'll also be a 32GB flavor for $569. What's more, the image also lists many additional countries: Canada, UK, Spain, Australia, Germany, France, Belgium, Malaysia, Sweden, Singapore, Finland, Greece, Denmark, New Zealand, Norway, Japan and Hong Kong. Just to be sure, we reached out to Oppo and were told that it's aiming to hit all these markets within Q1 next year; and better yet, it'll try to do that as close to the early-January China launch as possible. Sounds like the company's pushing for a global online retail channel (the blurred out URL probably indicates that it'll be a centralized website), and it'll be interesting to compare its performance to Xiaomi's more humble attempt closer to home.

Update: We've been told that this is only a partial list, so fret not if your country isn't there.

In this article: 1080p, android, apq8064, availability, china, find 5, Find5, mobilepostcross, oppo, phone, quad core, QuadCore
All products recommended by Engadget are selected by our editorial team, independent of our parent company. Some of our stories include affiliate links. If you buy something through one of these links, we may earn an affiliate commission.