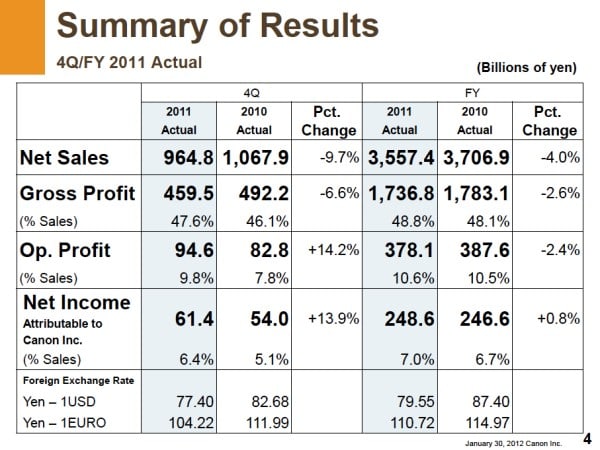 Looking forward to 2012, the cameramaker expects net income to increase to ¥250 billion, which would mark the second straight year of less than one percent growth. This forecast is lower than what many analysts expected, though Canon based its projections on assumptions that the yen will continue to rise against both the dollar and the euro, making Japanese exports more expensive in Western markets. It was against this backdrop of disappointment that company president and COO Tsuneji Uchida announced his resignation today, effective March 29th. The 70-year-old Uchida will be replaced by 76-year-old chairman Fujio Mitarai, with Uchida slipping into an advisory role. Coming off a year that saw a devastating tsunami in Japan and supply chain disruptions in flood-ravaged Thailand, Canon underscored its cautious outlook for 2012, in a statement: "The future remains increasingly uncertain amid growing concern over a global economic slowdown." Find Canon's full report at the source link, below.
Source: Canon, Bloomberg
In this article: business, camera, canon, earnings, earnings report, EarningsReport, financial, financials, Fujio Mitarai, FujioMitarai, fy 2011, Fy2011, industry, japan, money, profit, q4, q4 2011, Q42011, resignation, revenue, sales, shipment, Tsuneji Uchida, TsunejiUchida
All products recommended by Engadget are selected by our editorial team, independent of our parent company. Some of our stories include affiliate links. If you buy something through one of these links, we may earn an affiliate commission.
Share
Tweet
Share