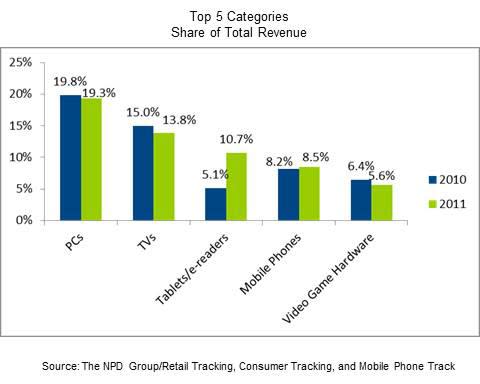 Canalys recently announced that smartphone shipments surpassed those of PCs for the whole of 2011. Well, NPD's just released its own set of hardware numbers, this time focused on revenue shares, and it appears PCs (that's laptops and desktops for NPD's purposes) are still far and away the biggest moneymakers around, bringing in about 19 percent (or $28 billion) of the reported $144 billion in hardware sales last year. TVs, PCs and gaming hardware each saw a decline in revenue share while smartphone and tablet sales grew -- slates and e-readers experienced a five percent increase, taking up nearly 11 percent of the hardware pie and raking in $15 billion. Unsurprisingly, Apple topped the chart for sales by manufacturer, seeing a 36 percent increase over 2010, while HP, Samsung, Sony and Dell rounded out the top five with varying levels of sales declines. For more number crunching and statistical whatnots, check out the full PR after the break.
Show full PR text
Apple tops 2011 as the #1 Brand and Best Buy is the #1 Retailer

PORT WASHINGTON, NEW YORK, FEBRUARY 13, 2012 – U.S. consumer technology hardware and consumable sales* fell just one half of a percent in 2011 ending the year at nearly $144 billion, according to leading market research company The NPD Group.

Nearly 60 percent of all sales in 2011 were driven by the top five categories; PCs, TVs, tablets/e-readers, mobile phones, and video game hardware, according to NPD's Retail and Consumer tracking services and Mobile Phone Track. PCs (notebooks and desktops) generated the most revenue with nearly $28 billion in sales, accounting for almost 20 percent of sales, but that figure was a decline of 3 percent from 2010. Tablets/e-readers were the clear winner in 2011, nearly doubling sales to $15 billion in 2011.

"U.S. hardware sales growth is becoming harder and harder to achieve at the broad industry level," said Stephen Baker, vice president of industry analysis at NPD. "Sales outside of the top five categories fell by 8 percent in 2011 as consumers shifted spending from older technologies to a narrow range of products."

Apple benefited from this shift as it was the leading consumer electronics brand for the second year in a row. Among the top five brands Apple was the only one to experience a sales increase, posting a 36 percent rise over 2010. By the critical fourth quarter Apple accounted for 19 percent of all sales dollars, almost twice as much as number two Hewlett-Packard.

At the retailer level, Best Buy came out on top once again, followed by Walmart and Apple. Staples and Amazon tied for fourth place to round out the top five, a repeat of 2010.

Sales through online, direct mail, and TV shopping channels jumped 7 percent and accounted for 24 percent of all sales, up from 22 percent in 2010. Sales through these non-retail channels captured 25 percent of industry revenue in the fourth quarter of 2011.

"While in-store sales fell about 2.5 percent in 2011, the growth in online volumes for retailers meant that retail name plates still accounted for well over four of every five dollars spent on CE hardware in the US," said Baker. "Despite their sales strength, retail stores still face serious challenges in 2012 as volumes in the traditional CE categories, which once carried these stores, continue to slide. It shouldn't be forgotten, however, that a large majority of mobile phones and tablets/e-readers (the two fastest growing CE categories) have mostly been driven through in-store experiences."