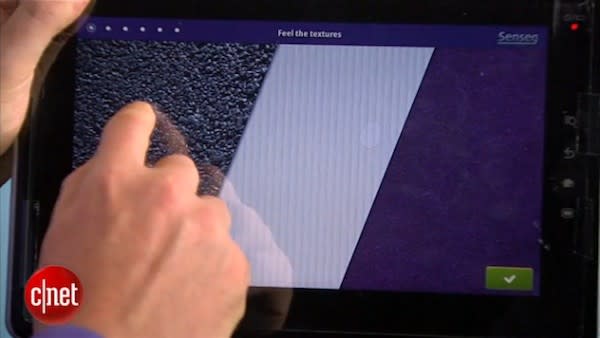 Remember Senseg's tactile touchscreen displays? Well, last December the company showed off a screen that used an electrostatic field to simulate friction and textures on the glass. Such technology was a couple of years away from being commercially viable, but there's a tiny glimmer of a chance it might be the new killer iPad feature. Pocket-lint spoke to a company rep who cryptically said that the company wasn't making any statements until "after Apple's announcement." Why would they issue any statement tied to today's Apple news? Could it connect with a remark made back in June 2011 to Trusted Reviews, that Senseg had partnered with a "certain tablet maker based in Cupertino?" Maybe that line in Apple's invitation to today's event is another clue: "We have something you really have to see. And Touch." After all, Siri was announced at the "Let's talk iPhone" event, so it wouldn't be the first time the company places vague hints under our noses. Still, we have but a few hours left to wait until we really know what's coming, so join us for the live announcement later today.
Source: Pocket-lint
Coverage: Trusted Reviews
In this article: Apple, Cupertino, Electrostatic, Friction Display, FrictionDisplay, iPad, iPad 3, iPad HD, Ipad3, IpadHd, Rumor, Rumor Mill, RumorMill, Senseg, Tactile, Tactile Display, Tactile Screen, Tactile TouchScreen, TactileDisplay, TactileScreen, TactileTouchscreen, Tim Cook, TimCook, Touch
All products recommended by Engadget are selected by our editorial team, independent of our parent company. Some of our stories include affiliate links. If you buy something through one of these links, we may earn an affiliate commission.
Share
Tweet
Share