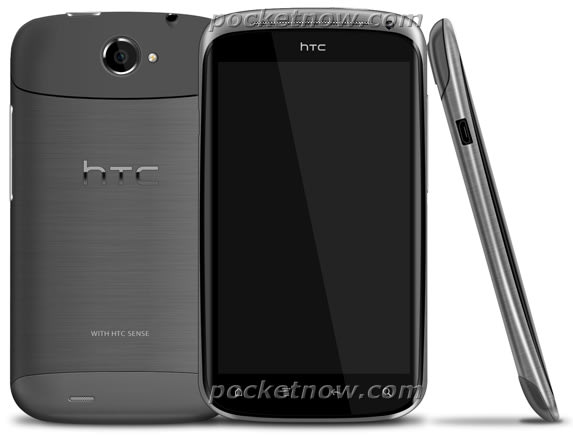 In some alternate universe, the One S would be HTC's flagship phone. There's the new, forged-for-space body, a uniform 7.8mm thickness and a 4.3-inch Super AMOLED display -- normally enough to qualify for the top slot. However, HTC decided to make this its (upper) middleweight contender, putting the quad-core One X right above it -- and launching it at the same time. We've got the HSPA+ global edition, but aside from the radio differences, this is the same hardware you can expect to see from T-Mobile a little further down the line, and it's powered by a Snapdragon S4 processor similar to the one that will run inside the US version of the One X. Can the dual-core Snapdragon Krait possibly hold its own against Tegra 3? If you're in the market for a new Android device, why would you go for what is possibly HTC's second best? Perhaps -- dare we say -- it's not all about the cores and display size. Read on to see what the One series' mid-tier option has to offer.

The One S could be HTC's flagship: it's far ahead of its rivals performance-wise and looks great. However the screen is slightly lacking, particularly compared to its bigger brother's.

How would you rate the One S?
We want to hear what you think. Post a quick review now to join the conversation!
Write a review

The One S has an aluminum shell, but there's a difference between this and its unibody predecessors: this one's been treated to micro-arc oxidation. Throwing 10,000 volts at that body, what we're left with is a finish more akin to ceramic and stone than the usual matte metallic seen in HTC's past offerings. The company's gone on record saying that it toughens up the surface of the phone. While it certainly feels tougher, don't expect it to behave as flawlessly as Gorilla Glass -- we did notice some light scratches on the matte surface, though we at least didn't uncover any metal. Both the top and bottom segments are coated in a soft-finish plastic which doesn't disguise wear-and-tear as well. 12
The top part lifts off to show access to the micro-SIM, but that's all you can get to. Like the HTC Radar there's no access to the battery or microSD storage, but it's probably this hardware lock-down that's helped HTC slim this dual-core phone down to this 0.3-inch profile and it fitted our hand great. If the One X borders on the bulky, the 4.3-inch screen here feels just right. We've come a long way. The One S also packs HTC's new imaging tech: a dedicated ImageChip combined with a f/2.0 lens. The primary 8-megapixel camera gets a red trim on the black micro-arc oxidized version, while it's blue on the grey anodized variant. The module doesn't protrude as much as on One X, but we'd still have preferred a recessed lens. When we rest the phone down, you're resting it on the camera -- we can hear and feel the lens land on the surface. Aside from this flash of color on the camera, it's a relatively understated phone, with smaller Beats Audio branding at the base of the device, while the loudspeaker and ear piece grills are actually minute holes made into the body. Hidden behind the ear piece is a subtle notification light that glows from behind those holes to illustrate when the phones charging, charged and if there's some email or social networking nugget waiting for you.

A front-facing camera lies to the right of this, with the Super AMOLED screen dominating the rest of the front. While HTC's interpretation of Ice Cream Sandwich has been coupled with three capacitive buttons (no on-screen substitutes), it's replicated the original Android 4.0 phone by including a multitask button -- there's no menu or search buttons here. Protected by that plasma-bathed coating, you'll find Qualcomm's Snapdragon S4 Krait dual-core processor, ticking away at 1.5GHz, while 1GB of memory accompanies 12GB of available storage. A recent HTC-Dropbox deal means you'll also net an extra 25GB of storage for two years once you log in to the cloud storage service -- and yes, it's in addition to your existing cap.

Which do you want first: the good news or the bad news? Well, the good bit is that HTC has married a 540 x 960 qHD resolution with Super AMOLED. The bad news is that it's missing a "Plus" at the end of that moniker. Yes, we're dealing with a PenTile screen, and while there are still plenty willing to overlook that graininess, after seeing it side-by-side against the high-definition beauty on the One X, we're going to rule in favor of the latter. While Super AMOLED wins with the blacker blacks, whites are just a bit too off. Comparing the resolution on the two One series devices, differences in sharpness will only be apparent in native apps and on the web -- unless games and video content are ready for 720p, there's no difference in graphical polish, aside from those color palette issues.

This, along with the One X, is possibly the best Android cameraphone we've seen yet.

HTC's been pushing its new camera chops ever since Barcelona and we finally got a chance to try it out. And it works. Really well. This, along with the One X, is possibly the best Android cameraphone we've seen yet. Specification-wise, it's an eight-megapixel autofocus camera capable of 1080p video capture, with an LED flash and a tempting f/2.0 lens. In use, it's responsive, can capture video and stills concurrently and add several playful filters you might actually use. There's all the stable camera options to tweak inside the menus, including white balance, ISO and exposure, but if you're simply looking for an easy point-and-shoot, you'll never see them. The UI is an understated simple setup, with a big camera button matched by a similarly-sized video icon, while effects are located in a glass orb in the top right corner and a preview of the last still or video is in the lower right corner. Settings for flash, scenes, and the aforementioned technical options are all on the right side. Thanks to the f/2.0 lens, even shots in low-light turn out well, burst photography was especially impressive.

95
Video capture at 1080p is generally well-focused with a good balance of color and light adjustment. The takeaway here is that the One series have superb cameras; hardware and software both ensure good-quality images were taken quickly and easily.

HTC's introduced us to a dual-core 1.5GHz Snapdragon S4 (MSM8260A) paired with 1GB of memory. The One S never shirked from what we asked of it. Attempting to make the browser stutter proved fruitless and tiling a complete non-issue. Provided your 3G or WiFi connection can keep up, you'll sail through the internet. Loading times on meatier apps was short, and it generally coped well with the likes of Shadowgun and GTA 3, although the audio didn't match the video on the venerable console title. According to these benchmarks, the dual-core One S manages to trump its quad-core contemporary. Admittedly, tests like these can't be directly compared side-by-side, since the One X has a larger screen with much higher resolution, and takes advantage of a quad-core chip. Irrespective of this, the phone smoked its dual-core competition, leaving the likes of the Exynos-powered Galaxy Note choking on its exhaust.

The One S comes with a very middling 1,650mAh battery but performance betrayed those numbers. We hit just over eight and a half hours of constant video playback during our typical rundown test -- 2.5 hours more than its sibling, the HTC One X. This was at 50 percent brightness, with WiFi on (but not connected), and email and Twitter set to fetch updates at regular intervals. This pegs it at around the same lifespan as the iPhone 4S when it comes to video playback, although it doesn't quite match the bigger-screened Galaxy Note. Then again, it doesn't have the same 2,200mAh battery store to draw on. In more standard use, the phone lasted through our daily grind, including emails, web browsing sessions every two hours or so, some Spotify playback and a handful of voice calls and text messages. Charging the One S was still a daily ritual. Call reception was good, with the extra mic located at the top performing noise-cancellation duties. Data speeds were as expected on both O2's HSPA+ and Three's HSPA service. On HSPA+, we reached speeds of around 2.5Mbps down and just under 1.5Mbps up, while HSPA circled around 1Mbps up and 1Mbps down -- all pretty similar to results on our other handsets. On the other side of the pond, AT&T's HSPA+ nabbed us average speeds of around 4.5Mbps down and 1.1Mbps up. This global version features quad-band EDGE and tri-band HSPA+ 42Mbps (2100 / 900 / 850MHz) support -- an AWS-capable model is coming to T-Mobile in the US. 35
HTC's latest skin catches up with its corresponding Android version, at least number-wise. Sense 4 aims to cut the excess while offering up an experience that remains familiar to HTC fans in the past. A very difficult trick to pull off, but it's a definitive move forward. While it isn't stock, it certainly holds on to more Android riffs. Several widgets are also now available in both HTC and stock flavors.

Sporting a thinner and lighter design, the One S doesn't deserve to be hidden in the shadow of its pricier brother.

Something worth noting is the new Sense keyboard. We've been testing both the One S and the One X and found key spacing was a bit tighter than on HTC's polycarbonate number. Fortunately, it's held on to some of its better keyboard ideas -- you'll still be able to slide between numbers, accented letters and more obscure punctuation by holding down a letter and sliding across. Don't forget to check out our full Sense 4 review.

Sporting a thinner and lighter design, the One S doesn't deserve to be hidden in the shadow of its pricier brother. With the latest dual-core Snapdragon S4 and noticeable improvements to HTC's Sense UI, as well as Android 4.0 and a potent camera, this phone is likely to play a large part of the manufacturer's renewed efforts after a shaky 2011. With a tactile finish and enough power to go toe-to-toe with HTC's quad-core entrant, it comes down to whether you're willing to trade a technically weaker screen for a noticeable price difference and better battery life. It's a decision we'd prefer not to make.

Myriam Joire and Brad Molen contributed to this review.

In this article: Android, Android 4.0, Android4.0, HTC, HTC One, HTC One S, HTC Sense, htc+one+s+review, HtcOne, HtcOneS, htconesreview, HtcSense, Ice Cream Sandwich, IceCreamSandwich, Krait, mobilepostcross, msm8260A, One S, OneS, review, Sense 4, Sense4, video
All products recommended by Engadget are selected by our editorial team, independent of our parent company. Some of our stories include affiliate links. If you buy something through one of these links, we may earn an affiliate commission.
Share
Tweet
Share
Save