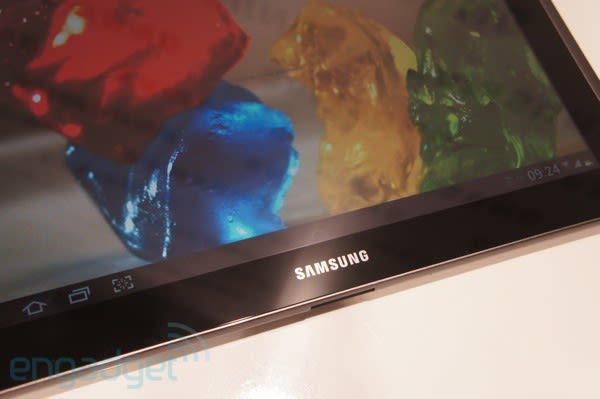 This is, well, a little strange. The fine folks over at Netbooknews are reporting that Samsung has ended production on the GT P5100 -- better known as the Galaxy Tab 2 10.1. The story comes courtesy of an unnamed "Korean Samsung insider" who claims the device is getting upgraded to a quad-core CPU. Whether the chip in question is the much lauded 32nm Exynos 4412, which packs not only four Cortex A9 cores, but four Mali 604 GPU cores as well, is unknown. It's also not clear how this is going to affect US launch plans. Rumors are the Galaxy Note 10.1 will be getting a similar brain transplant before hitting the market. Sadly, all we can do right now hold our breath and wish real hard that both will hit shelves sooner rather than later and with an extra pair of cores in tow. Sammy better get a move on too if it's gonna have to give Uncle Sam another crack at this slate.

Update: Samsung reached out to us to confirm that the above report is not true. The US version of this tablet will still have a dual-core CPU and it's still shipping on May 13th, with pre-orders starting on May 4th.

Via: Netbooknews
Source: Netbooknews.de
In this article: exynos, galaxy note, galaxy note 10.1, galaxy tab, galaxy tab 2, galaxy tab 2 10.1, GalaxyNote, GalaxyNote10.1, GalaxyTab, GalaxyTab2, GalaxyTab210.1, GT P5100, GtP5100, netbooknews, quad-core, rumor, samsung, samsung galaxy tab, samsung galaxy tab 2 10.1, SamsungGalaxyTab, SamsungGalaxyTab210.1
All products recommended by Engadget are selected by our editorial team, independent of our parent company. Some of our stories include affiliate links. If you buy something through one of these links, we may earn an affiliate commission.
Share
Tweet
Share
Save