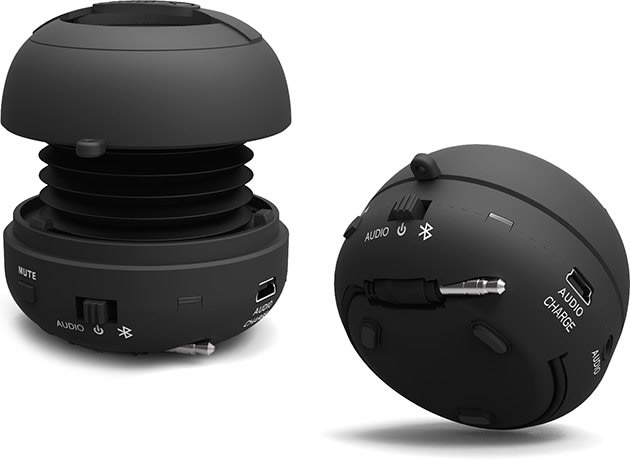 Speakers these days! They are everywhere, in constantly evolving iterations, smaller and more versatile than ever before. Singaporean manufacturer X-mini has a pretty good foothold in this game with a consistent brand message of "Sound Beyond Size." That indicates the portability, mass, and reproductive capacity of its products in a pretty nebulous fashion, so we decided to grab its latest offering, the Bluetooth-toting KAI, and place it in our real lives for a few months. It's available now for $99, which will take it off the table for many casual listeners, but those who crave what's next in distributed audio might find KAI to be quite the ear-opener. We got pretty close with it (but not weird close), and we have a couple of things to say about that whole size / sound relationship they're so keen on.

Though Audiophiles will want to run in the other direction, portability enthusiasts will find inventive ways to bring sound to new places

Be the first to review the Kai?
Your ratings help us make the buyer’s guide better for everyone.
Write a review

It's small! In the closed position, about 2.5 inches in diameter and 2 inches tall; twisting the two halves lets the accordian-like resonator pop up and brings the capsule to a slightly more vertical three inches. It feels a bit like a tiny baseball in the hand, sheathed in a rubbery smooth-touch material.

To our pleasant surprise, the KAI lasted almost eight solid hours on a Bluetooth-only connection (it took about the same amount of time to charge via the included mini-USB cable). About five minutes before it died it started sending us death knells in the form of beeps that became increasingly desperate until it finally shut off completely.

The top half houses the speaker cone, while the lower section is home to everything else: power / Bluetooth / wired audio switch, 1/8-inch input, mini-USB connection for audio and charging, mute button, audio / phone controls, status indicator LED, a tiny mic port, and a built-in 1/8-inch male audio connector with a five-inch tether. It's certainly a lot to pack into just a few square inches, but everything is logically and thoughtfully placed.

How does it sound? Well, to be blunt, it's not remarkable. It actually reminds us very precisely of the speakers we had when PCs first became "MPC" compatible -- you know the ones we're talking about. The accordion-like "resonator" feature, while very, very cute, is almost worthless as far as providing more frequency response. Any crispness that may be derived from the highs is crushed the moment any hint of low end is supposed to enter the mix.

Loudness is indeed a potentially misleading issue here. It can get loud, but in the way the stock stereo in your '87 Civic gets loud; decent at half volume and intolerably distorted at full tilt. It can get about two times louder than the built-in speaker on our two-year-old EVO 4G, and about equally as loud as our MacBook Pro speakers. But you wouldn't make it that loud unless you wanted your Katy Perry remix to sound like it was mastered inside a broken tin can factory. The quality and volume of the reproduction in the KAI is something that standard cell phones should be aiming for, not standalone speakers.

Simply put: it's the Bluetooth, man. The KAI is, first and foremost, the logical extension of audio portability. While you may not be able to rave hard to the low end coming out of this thing, it's definitely something that you have to have in your life to understand / appreciate. We found a boatload of tiny cases where the KAI is useful enough to overcome its shortcomings in reproduction quality. It's small, light and includes a built-in strap opening, which means you can attach it to almost anything with just a rubber band. It's perfect for bike rides, when you shouldn't really be experiencing anything in Dolby or THX, anyway. And, when you get a call, you can act like a Big Cheese with a Bluetooth headset, but instead of a headset, it's a cute little capsule. It's good for practical jokes, remote-control-fartbox style. And, because of the built-in audio out, it can act as a Bluetooth dongle: beam audio to it and hook the 1/8-inch audio connector out to a nicer-sounding system.

It is very, very functional in these ways, and the Bluetooth works about as smoothly as we've seen with other modern Bluetooth headsets. That means it works seamlessly about seventy percent of the time, and the rest of the time you'll probably need to delete it from the audio host device's list, rescan and re-pair. About three hours into our first pairing, we experienced an awful distortion we couldn't get rid of except by restarting the device, but that's pretty standard Bluetooth fare, and we can't be sure if it was KAI's fault or the device it was paired with. The speakerphone functionality works fine, except for an echo on the other side of the conversation that we couldn't get rid of, which doesn't bother us so much since we doubt we'll be using this thing at a boardroom meeting anytime soon.

If we were X-mini, we'd hold off on touting the audio quality of these things and change "Sound Beyond Size" to "Audio Everywhere," or something more apt. It's so small you'll never hesitate to throw it in your bag, and there are enough built-in connections, wired and otherwise, to make it a very valuable card to have in your deck. It is, without a doubt, the best juggling speaker we've ever encountered, which is something that makes the KAI more refreshingly different than any other boombox out there.

Source: X-mini
In this article: audio, bluetooth, bluetooth speaker, BluetoothSpeaker, capsule, kai, portability, portable, portable audio, PortableAudio, review, speaker, speakers, tiny, x-mini, x-mini kai, X-miniKai, xmini
All products recommended by Engadget are selected by our editorial team, independent of our parent company. Some of our stories include affiliate links. If you buy something through one of these links, we may earn an affiliate commission.