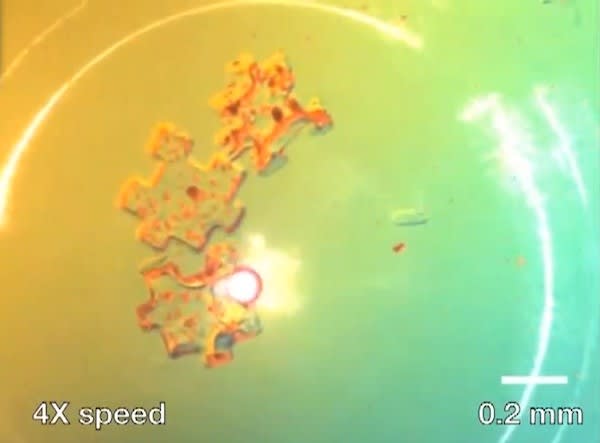 They may not be "robots" as most have come to expect, but these so-called microrobots developed by a team of researchers from the University of Hawaii at Manoa do have at least one thing in common with many of their mechanical counterparts: lasers. As IEEE Spectrum reports, the bots themselves are actually nothing more than bubbles of air in a saline solution, but they become "microrobots" when the laser is added to the equation, which serves as an engine of sorts and allows the researchers to control both the speed and direction of the bubbles. That, they say, could allow the bots to be used for a variety of tasks, including assembling microstructures and then disappearing without a trace when the bubble is popped. Head on past the break for a video of what they're already capable of.

Source: IEEE Spectrum
In this article: laser, lasers, micro, microbot, microbots, microrobot, nanorobotics, nanotech, nanotechnology, robot, robots, University of Hawaii, University of Hawaii at Manoa, UniversityOfHawaii, UniversityOfHawaiiAtManoa, video
All products recommended by Engadget are selected by our editorial team, independent of our parent company. Some of our stories include affiliate links. If you buy something through one of these links, we may earn an affiliate commission.
Share
Tweet
Share
Save