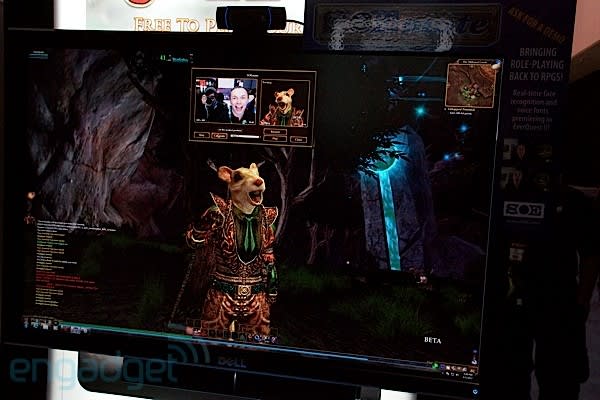 Sony's PlayStation division may have been the main focus this week at E3, but Sony Online Entertainment has something unique of its own to show off for MMORG players. Specifically, folks who are into the PC title Everquest II will soon be able to access a facial recognition feature called SOEmote (S-O Emote). It's no secret that these types of games require massive amounts of communication between players, and SOEmote is an attempt to make in-game conversations more personal than ever. Utilizing any webcam, the software is able map and track your noggin at 64 points, allowing your onscreen character to replicate any facial movements you make. We got a chance to mess around with a beta version of the software, and the results are impressive to say the least -- pretty much all of our facial expressions were accurately recreated. Join us past the break for more details and a hands-on faces-on video demo of it in action.

To get started, SOEmote takes a moment to lock-on to a face via your webcam, at which point it can mimic how you emote. Actions like turning our eyes from left to right, squinting and opening our month were all smoothly replicated on our virtual character, and it seemed to do it all in a one-to-one fashion. Even while we talked in an overly animated manner, SOE rarely skipped a beat in translating us into the game. We'd be remiss not to mention, however, that our demo utilized SOE's servers in nearby San Diego, so your mileage my vary as all of the processing is done on Sony's side. Aside from that, the software currently has some trouble separating thick glasses from eyebrows, but according to EII's Director of Development, David Georgeson, this quirk should be smoothed out by the time it releases. Furthermore, we're told that it'll also be able to follow your face as you turn it from side to side -- in the build we viewed, you had to look straight-on and head turns couldn't be recreated.

As it stands, SOEmote could seriously affect the way we interact in games by blurring the lines even further between real life interaction and our virtual personas. The best part of all? Players will be able to access SOEmote for free (just like the game itself) when it steps out of beta later this month. We can't wait to see how SOEmote progresses, but for now, check us out making weird faces with the software in the video above.

In this article: David Georgeson, DavidGeorgeson, e3, e3 2012, E32012, emote, everquest, everquest II, EverquestIi, face tracking, FaceTracking, facial recognition, FacialRecognition, hands-on, mmorg, online gaming, OnlineGaming, soe, soemote, Sony Online Entertainment, SonyOnlineEntertainment, video
All products recommended by Engadget are selected by our editorial team, independent of our parent company. Some of our stories include affiliate links. If you buy something through one of these links, we may earn an affiliate commission.